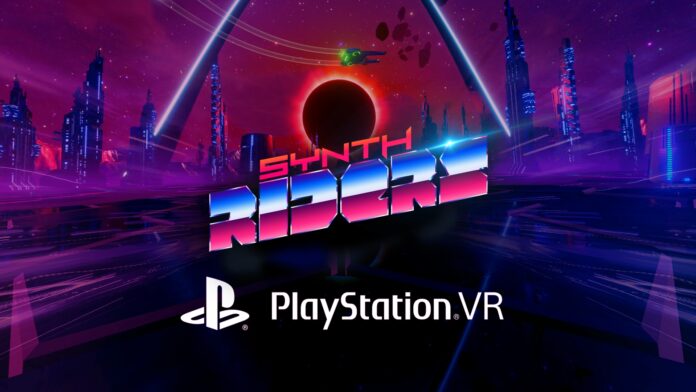 The PlayStation VR platform (PSVR) has plenty of exciting titles being released in the latter half of 2021 and one of the first to come flying into your headsets is Synth Riders, a Freestyle-Dance game as sighted by its developers Kluge Interactive.

You may have heard the name in the VR community already as the game has been available on Oculus’s Quest & Rift as well as Steam VR since 2019 but started Early Access as far back as 2018.

So now that the game is finally on PSVR is it worth your time and money to pick it up?

What Is Synth Riders?

Synth Riders first and foremost is a VR rhythm workout game as described by its developers Kluge Interactive. As you will expect if you have played any VR rhythm game before you have to hit the notes coming towards you along with the beat of the music. Where things differ are with the visuals and gameplay.

It’s easy to dismiss Synth Riders as a clone of other titles like Beat Saber or Box VR even but this game does have a different feel to its gameplay and the way it makes you move.

So after picking up your two move controllers and slipping on your VR headset you will find yourself in a menu screen with your playlist of music and gameplay modifiers. The great thing about this menu screen is that the background can be changed to that of one of the environments that you will be playing in. My personal favourite is the neon-soaked cyberpunk rooftop of Spin City but this is not recommended for anyone with a fear of heights. 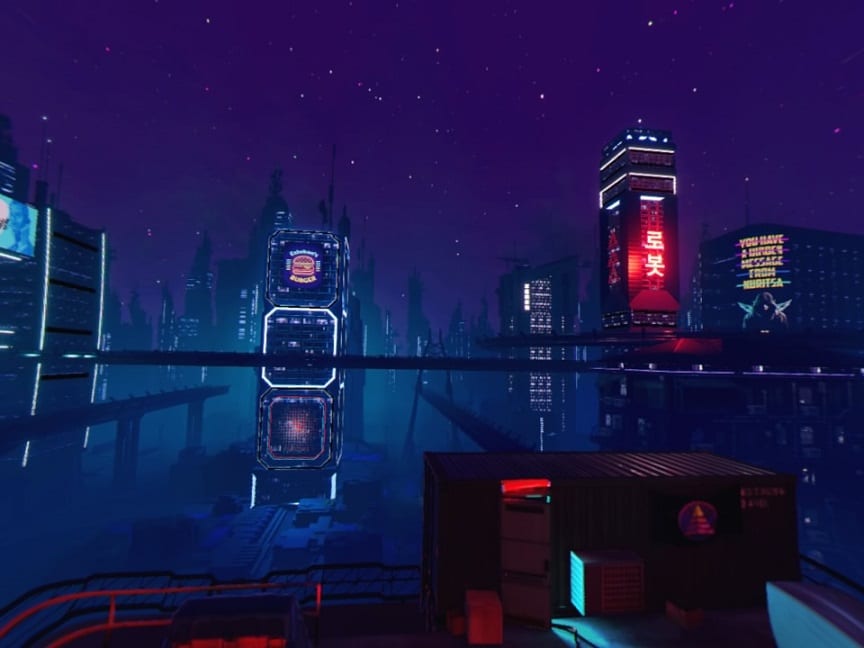 I wouldn’t worry too much about the modifiers at this stage but do recommend flicking through the environments option and if you’re feeling brave switch on the moving environments. 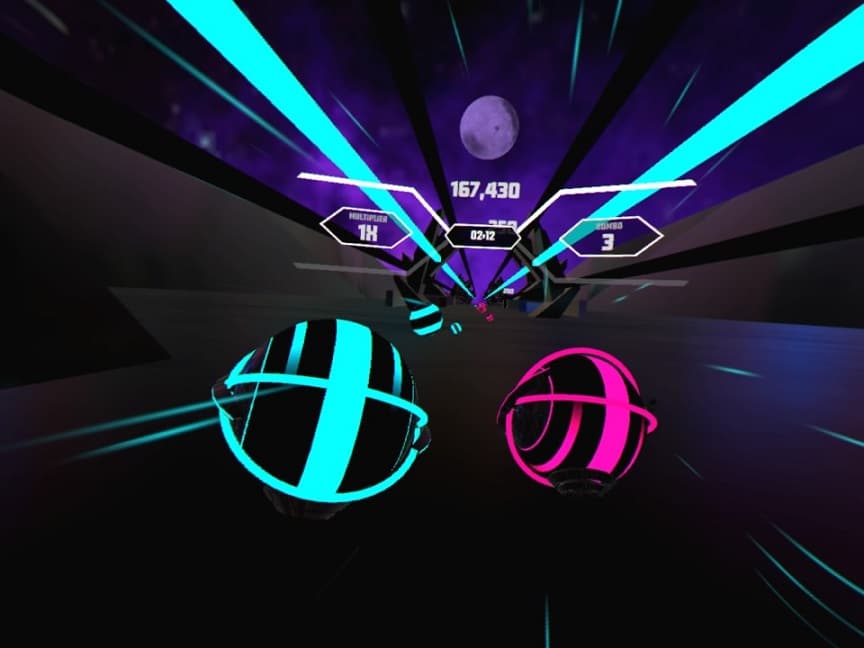 After a few single notes of each colour you will be presented with a long line of connected notes with which to follow along with your orb, this is known as a rail and your orb will spin at high speed as you run it along the rail while your move controller gives some excellent vibration feedback.

The next thing to be thrown your way will be green and gold notes, green notes are very easy as they can be hit by either hand but gold notes need you to hold both orbs together when hitting them adding an extra challenge to gameplay. 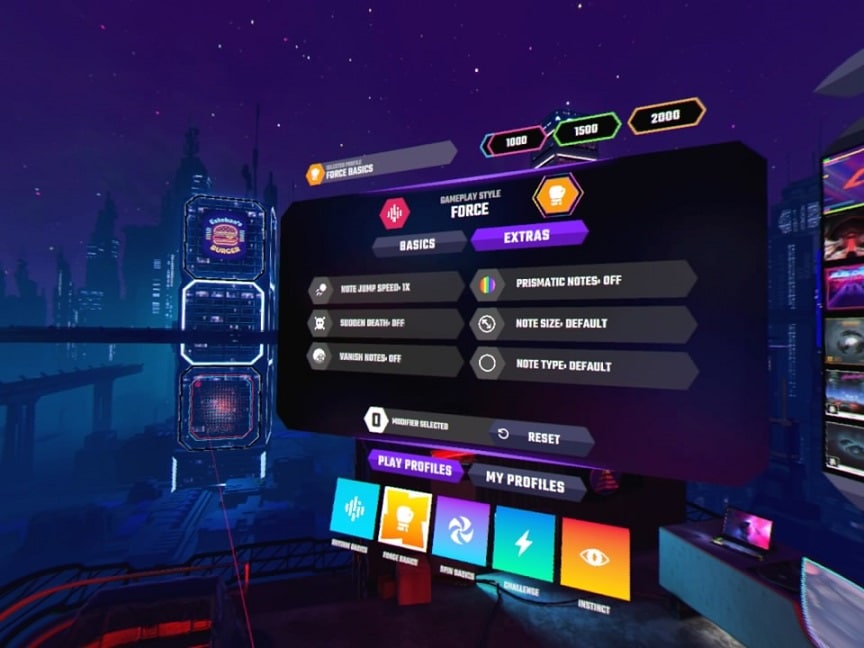 Where you can really shake things up is the game modifier options. If you’ve played Beat Saber before then you’ll find the familiar No Fails and Obstacles On/Off options as you would expect but Synth Riders adds in other options like changing the size of notes coming towards you and a spin mode. Now obviously when you’re wearing a PSVR headset you can’t be doing full 360-degree rotations unless you’re looking to pull your VR box and/or PlayStation console onto the floor. What is nice about this option though and how it differs from Beat Sabers 90-degree mode is that this isn’t set to on or off, when you turn on Spin Mode you have the option of Mild, Styled or Wild spin, the other great thing is that this mode is not just available for a handful of songs but for the entire catalogue of songs in the game. 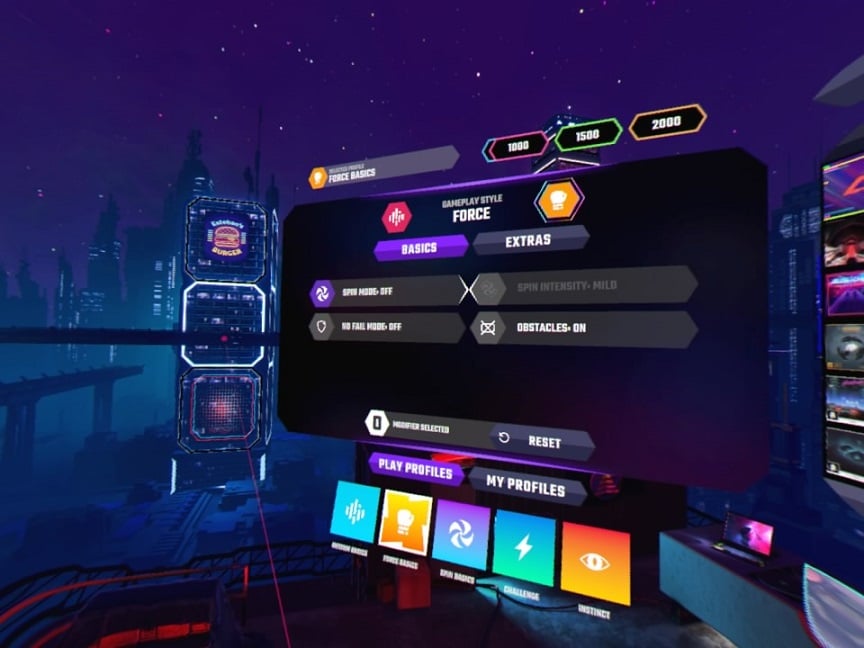 Another place where Synth Riders excels is in its level of detail in its environments, many of these feel like levels built for an action sci-fi game filled with plenty of neon and lots going on. 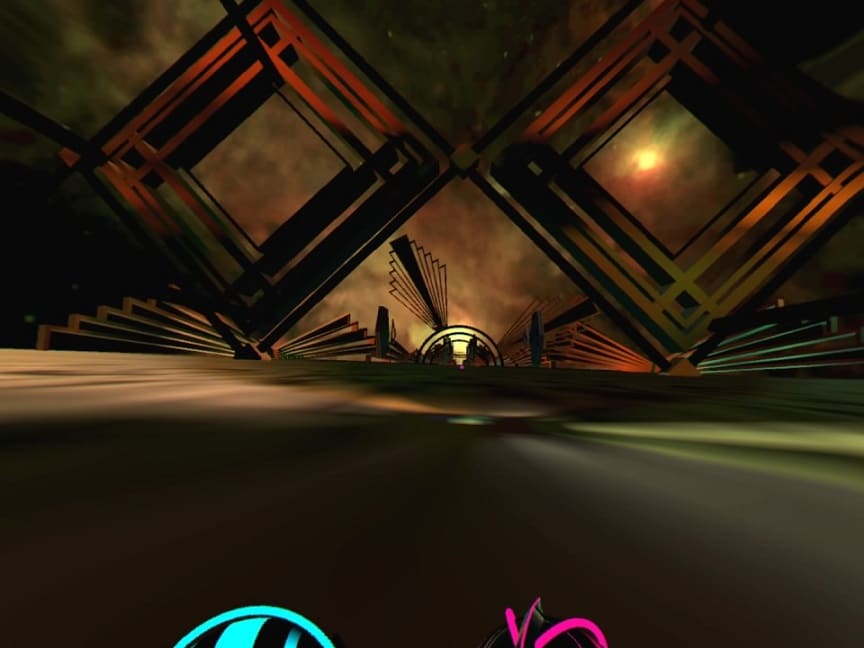 Whether it’s the cyberpunk city rooftop of Spin City with its neon signs advertising everything from burgers to beer and even a wanted sign showing a rather large bounty is on someone’s head, to The Lost City which feels like you are running through The Grid from Tron.

One of my favourites is the DLC stage The Rise Of The Golden Phoenix which has you running past huge golden shapes while the titular Golden Phoenix flies around in the distance making its way towards you before eventually flying right over your head with its glowing eyes staring down at you in glorious 3D. This large metallic bird reminds me a lot of the villain Clockwerk from the Sly Cooper games, which is equally awesome to see as well as incredibly imposing while you’re trying to concentrate on hitting your notes. 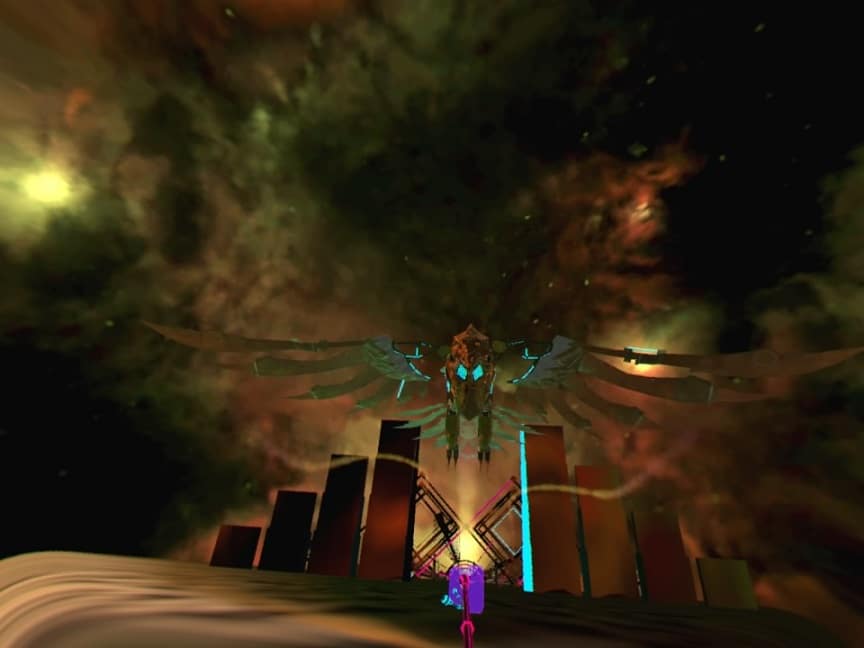 I honestly couldn’t recommend turning on moving environments enough when playing this game! It is as if you are flying or running through the level while hitting notes to play the music and it makes the whole experience that much more thrilling to play. Just be wary when putting the headset on your non-VR friends or your nan, if they don’t have their VR legs yet this may be way too much for them to handle straight away.

Of course I cannot talk about this game without discussing the music. So let’s break this down into cold hard facts before going into it in more detail. 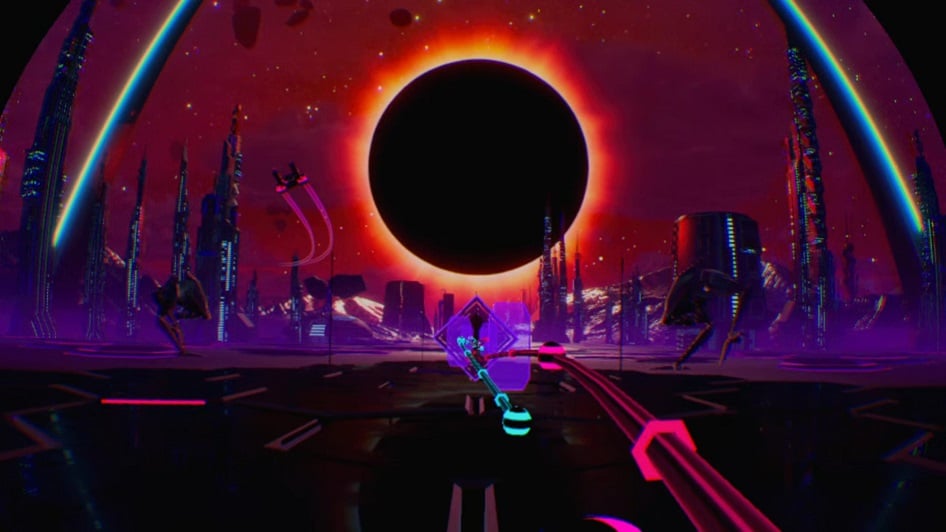 Synth Riders comes as standard with 55 songs, then if you somehow get bored or wish to expand your song library there are 25 DLC songs available to purchase, these include hits from artists like Muse and The Offspring.

I highly recommend checking out the Electro Swing Essentials pack if you are looking for something with a very different beat to what you may usually find in this type of game.

Synth Riders comes into a VR market that already has a good selection of rhythm-based games but it definitely does enough to stand out from the crowd. Its beautiful levels, plentiful music library and varied modifiers give lots of replayability.

Unfortunately the online features like Multiplayer and Weekly Challenges which are in the PCVR versions of the game are currently missing but we can expect updates to come over time.

All in all Synth Riders is an excellent game to get you off the couch and dancing in your living room, the game is fun enough that you don’t feel as if you are exercising at all.

It is a worthwhile addition to the PSVR library and a great choice to crack out when you have any friends over.

Synth Riders is available on the PlayStation Store for £19.99 with a 20% PS Plus discount.

The Complete Music Collection with all available DLC is available separately for £26.99 or you can buy the game and Complete Music Pack together for £44.99 which also has a 20% PS Plus discount.

Song packs are also available from £6.49 and individual songs can be purchased for as little as £0.79.

How to Play Marvel Snap – Everything you need to know

Original Witcher Game Is Being Remade from the Ground Up!