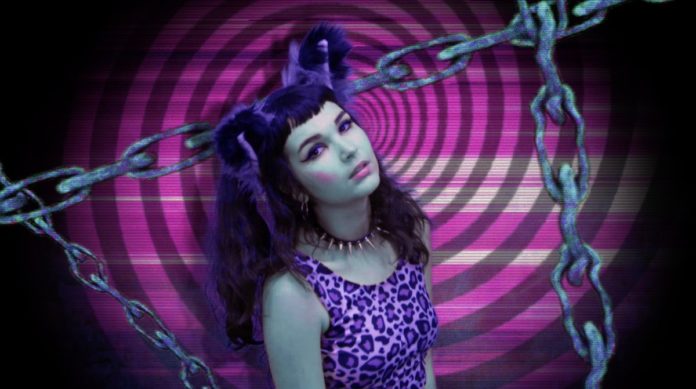 Fellatia G has been creating music through her Youtube channel since 2012. As a female artist, she raps and creates a smutty world that talks about her sexuality and the world of a 20-something with the sleaziest of language, strong vivid hooks and often garnishing her music videos with her artwork. She currently is dropping a new game-cum-album that she has created in way of “Nightmare Temptation Academy”. FinalBoss put on its rubber gloves and goggles and got in touch with the artist.

Fellatia G: My best year yet! 2020 is already looking better though.

FB: How did you come to the decision on your name, Fellatia Geisha?

FG: I came up with the name when I was 15 in high school, when I first started rapping.

I go by just Fellatia G now; as politically correct ideologies swept the academic spaces I must occupy to survive financially as an artist— keeping the “geisha” in my name became a nuisance.  The “geisha” was not very important to me; it definitely was not worth losing opportunities and listeners before they even engaged with my work. I didn’t want to change it for a very long time because it seemed like a very arbitrary place for me to draw the line morally considering all of the other transgressions in my work. The change does not reflect my beliefs or values — just a move for me not to alienate people before they actually listen to my music. It was funny because when I first changed to Fellatia G, someone said it was cultural appropriation because the G could stand for gangsta. Pretty incredible!

FB: How would you describe your sound?

FG: My delivery is bratty and sarcastic with a lyrical emphasis on vivid narratives and ultra-tight rhyme-schemes. The Nightmare Temptation Academy album fuses electroclash/pop-punk/trip-hop/lo-fi/cloud rap.

FB: You have a very particular in-your-face, smutty style. Is that you, or an act?

FG: It is very obviously not possible for me to behave like Fellatia G 24/7 or literally engage in the murderous acts I describe in my lyrics. Fellatia G is an extreme hyperbole of my feelings and my identity.  I spend so much time creating my art, and the mode of creating and being an artist is a big part of my personality.

In reality, I don’t attend many social events or parties because I find them very boring and time-wasting. All of my close friends are people who I make art with. As a person, I think I am very blunt and my sense of humour is ironic and sordid; but I am socially avoidant and only spend time with people who I am very close with who know me well… so I am not particularly “smutty” or “in your face” as a person.  My most defining quality is being a diligent hard worker on self-directed projects.

Sexuality is a part of life and being human, an enjoyment,  not a particular source of empowerment. Being sexy and pretty is also just a pleasure and a blessing.

FB: It’s pretty unique in its own way; that you are very willing to be this grimy bottom of the depths artist. You purposely sexualise yourself too, is that important to you, is it a sense of empowerment that you can?

FG: Making whatever I want is empowering. Having the ability to make a fully animated feature-length production on my own is empowering. My exquisite rhyming skills are empowering. Empowering is not even the right word because I already have developed the power to do these things; it is an exertion of my power; my power in action and practice.

Sexuality is a part of life and being human, an enjoyment,  not a particular source of empowerment. Being sexy and pretty is also just a pleasure and a blessing.

FB: How do you shoot your music videos? They’re just the right side of low budget. They’re very inventive with their visuals, lo-fi even.

FG: So far they’ve been shot on a DSLR, or a newer iPhone, with a friend filming.  I have been saving money to make videos with a higher production value; that’s why I haven’t released a music video in a while. The new game & album, Nightmare Temptation Academy, is the first project that reflects the production value that I am going to continue to uphold. I am more interested in quality>quantity now.

FB: How did you get that whole stadium to yourself for that one video where you had crabs?

FG: I took the video down! I still like the lyrics and the video is still funny to me, but I hate my delivery/voice and the beat! Makes me cringe. It no longer represents the direction I am going with my work and my music.

I got the stadium to myself because when I was a student at FSU they would leave the stadiums open during the day all the time; people were allowed to be in the stadium; there would always be a few people running up and down the bleachers for exercise.  Going on to the field, which we did allegedly do, was not permitted, but it was very easy to get on to.

FB: The NeedleDrop reviewed your mixtape a few years back. How was that to find out?

FG: So amazing! Anthony Fantano really is the biggest music nerd! He knows and supports even the most obscure artists. It was great because I got a lot of new fans that knew me for just my music more so than the other art I have made. It meant a lot to me that as a music critic and expert, he takes the time to listen to my music and recognizes it as stand out and unique! I highly respect his opinions and his hard work. I am very happy that he is a vocal Bernie Sanders supporter.

FB: Tell me about the game you’ve got coming out. You’ve talked about working on it for absolutely ages, and now it’s actually finally here… How many hours did you put in?

FG: Here’s a very thorough description about the game: https://lenanw.itch.io/nightmare-temptation-academy. Yeah, I worked on it for almost 2 years; I wasn’t counting but if I had to estimate it would be around 3,000 hours.

FB: What made you decide to do it?

FG: I have wanted to make a rap musical for a long time; initially I imagined something live-action but this would be too expensive and I do not like relying on other people. Storytelling has always been a big part of my lyrics, so creating a musical seemed like a way to really emphasize the narrative aspect.

In my past games, I would just shove my music in as the background; it was not particularly made for the game, and I felt like the lyrics would clash with the text-based gameplay that required a lot of reading. I was just putting my raps in my games because I wanted people to know that I made games AND rapped. So I wanted to make a work that really tied all of my practices together in a cohesive way.

Storytelling has always been a big part of my lyrics, so creating a musical seemed like a way to really emphasize the narrative aspect.

FB: I get the feeling that a lot of your work is coming from mostly yourself, with only so much help to get it seen/made. Is that getting better as you build yourself a name or is it still a struggle?

FG: Yes that is correct. I make my work on my own, I do not have a manager or a team behind me. Yes, it is a struggle, it is actually getting harder and more frustrating.

I have come to realize that talent and hard work doesn’t guarantee success/recognition, especially in music and art. It is mostly nepotism and ladder climbing, and as an introverted person that is not a viable or honest path for me. I spend pretty much all my time creating, which I think is obvious considering the amount of labour that went into Nightmare Temptation Academy. I have spent too much time making to have time for the necessary social bullshitting aspect of building your brand as an artist. I have lost countless opportunities from not wanting to hang out with people, go to shows, or pretend to like someone.

I did work on Nightmare Temptation Academy with a few friends! Costcodreamgurl made the minigames and contributed some environment elements. Moon Bounce produced most of the instrumentals. My friends PhaZero, Push Push, Clara Bizna$$ and Rissa Allie did the voice acting of the main characters.

FB: You did an interview with HuffPost in 2015; you’ve finished school now, your music continues, rape culture continues, has your message changed? Have you changed as an artist? Is that HuffPost piece something that you’re proud of?

FG: I am proud to have been written upon the HuffPost, and Tyler Kinkade who wrote the piece is an awesome writer and journalist!  But I do not like the art that I made during that era of my work anymore; I have outgrown that body of work. I cringe at anything I made more than three years ago, so it’s not an article that I still share.

I do not have a clear message; I never really did. I used to talk about my work in a very reductive way, spelling out a “message” to make it easy for people to talk about and share. There is no moral lesson or particular understanding I want people to walk away with. I do not like being righteous or prescriptive. I am coping with/reacting to/reckoning with our horrific culture (which includes rape culture).

My inspirations and my motivations for making my work have not changed, I describe them as Inspired by the DIY amateur execution of early net art (e.g. mouchette.org), as well as the flash game renaissance (e.g. newgrounds.com), she anachronically condenses time into warped worlds reconciling a lifetime of internet addiction from the late 90s to the present.

If you enjoyed this article please consider checking out more of our interviews.

23 September 2019
We use cookies to ensure that we give you the best experience on our website. If you continue to use this site we will assume that you are happy with it.Ok