Artspear Entertainment are the creators of the Toon Sandwich brand on Youtube. Headed up by proud Aussie creators/performers Rita Artmann and Joe Bauer, they are known for their comical takes on the superhero genre through their animated work – and elsewhere, their low budget efforts in the live action realm. Through their extraordinarily successful animated work, they have created their own unique multiverse; willing to poke fun at anyone daring to wear spandex or suffer from dangerous levels of gamma rays. Via email, FinalBoss reached out to our distant cousins for a chat.

Artspear Entertainment: Australia is a beautiful place to live. Right now it’s still Winter and sitting at about 20 degrees. It is a huge country and we haven’t seen all of it but would love to travel around our own backyard more in the future.

FB: You’re both working as Australian film makers, bar a few major hits I’m not that familiar with the industry. Do you enjoy it? Would you ever rather want to work in the US, or even the UK perhaps?

AE: We actually haven’t been very successful breaking in to the traditional Australian film industry. We haven’t received any funding and haven’t worked on any of the big Australian productions. We would love to work in both the US and the UK one day. We do hope to break into more mainstream content and eventually create for companies like Netflix or Disney – we can dream right? For now we will keep building our audience on YT. We are releasing our first live action series for YouTube (The Void Rebooted) in the next few months and are hoping that will help us take a step in the right direction.

FB: What’s your animation background? Did you both study?

FB: And how did you first meet, and decide that you would work together?

AE: Back in 2009, Joe had just graduated from Uni and Rita auditioned for his first ever feature film ‘The Killage‘ (she got the part). The movie was filmed over only one weekend and resulted in Rita breaking a leg (literally). The project wasn’t finished and the rest of the production team abandoned the film and moved on. We decided to start from scratch and Rita stepped in to the producing role as well as acting. The film was re-cast and re-shot in 2010 and was released on DVD in the UK/Eire/NZ and Australia. We have been living together and working together ever since. In 2014 we took it one step further and got married. Long story short – it is always worth going to those unpaid/independent feature film auditions.

FB: You both come from an acting background – can you tell us more about that? What’s it like now to work mostly as voice actors?

AE: Joe is a self taught actor and Rita studied at The Actors Workshop under the direction of Lyn Kidd. Voice acting is a lot of fun but when most of your job is trying to re-create another actor’s voice or performance it can become difficult. Some actors/characters are easier to imitate than others, but we both prefer to create our own characters.

FB: Your YouTube channel’s earlier videos are all live action. Why did you suddenly make the jump to animation?

AE: Originally our channel was just an outlet to put up trailers for our feature films and shorts. We uploaded The Void season 1 to YouTube after it stopped screening on community TV in Brisbane but we never created content exclusively for YouTube until Toon Sandwich. Animation came about as something that we could do just the two of us without relying on anyone else. It was something we could do semi-regularly and from home so it just made sense to give that a go. We wanted to find an audience and connect with them so that we could make the kind of content we want and have a way of distributing it without involving a third party distributor. As independent unknowns we knew we had to find a way to harness that side of it if we ever wanted to make our passion a full time job. 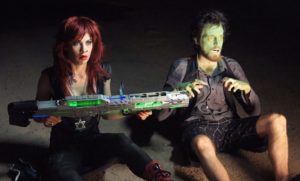 FB: You created feature length live-action film “Australiens” – why did you take that on? That must have been a huge immediate jump up.

AE: Australiens was actually our second feature film after The Killage. Having started out on a feature length project the idea was not to take a step down by moving to short films.

FB: So much of your videos spoof superheroes, why? You must just adore what Marvel are doing right now.

AE: Yes we love Marvel and the cinematic world they have managed to build. But honestly, we spoof what we think our audience will want to watch and the last few years superhero movies have dominated the industry. 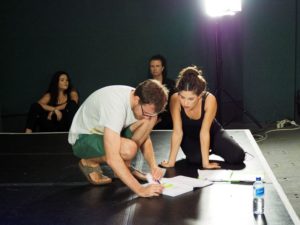 AE: So many to choose from now! The Dark Knight probably still has the top spot but the last two Avengers are up there (along with Civil War). But if it’s a contest of quotability, there’s a clear winner: Mystery Men.

FB: Outside of the hero genre, what films do you both like?

AE: We love us a good trilogy – Original (un-“Lucastroyed”) Star Wars Trilogy, Indiana Jones Trilogy (not counting 4 – it’s annoying how specific we have to be!), Lord of the Rings, Back to the Future, Dark Knight, Toy Story, Naked Gun. Other individual favourites: The Shawshank Redemption, The Prestige, Jurassic Park, Aliens, Braveheart, A Few Good Men, The Thing, The Mission Impossibles, Zodiac, – arrgh too many!

It was so entertaining to see a dozen familiar heroes using their powers against each other rather than a horde of anonymous villains.

FB: Your superhero/villain bowls are my favourite of your output. They’re so rich, and so packed full of characters, with each new line almost acting as its own sketch – what gave you the idea to make this series? How do you even draft something as frantic as that? And how long did both episodes take to finish?

AE: It was inspired by the airport battle in Captain America: Civil War. It was so entertaining to see a dozen familiar heroes using their specific powers against each other rather than a horde of anonymous robots/aliens. We started to imagine what it would be like to see more than just Marvel characters involved in the fight and the idea of an all-heroes, all-franchises battle royale on an alien planet came from that.

Then of course the obvious sequel is to do one with all the villains, except there’s lots more villains than heroes so the video gets bigger and more complicated. We’re working on the third part now which will see the heroes and villains join forces to take on their captor. Scripting them is a lengthy process of scribbling down individual gags over time until we’d accumulated enough to group them into a rough structure based around the characters we wanted to see make it through to the final round. It’s hard to determine how long the scripting took because a lot of it was writing down a gag here and there over a period of several months, but once the scripts were completed, the Hero Bowl took roughly 2.5 months and the Villain Bowl took roughly 5 months.

Rita and Joe can be found at their Youtube channel, Artspear’s Facebook Page, and Toon Sandwich’s respectively.

If you’re looking for more articles and interviews about how to get into the film industry – or just the media sector in general – be sure to keep looking around FinalBoss!

An Exclusive Interview with Benjamin Dickinson, Director & Star of Creative...

15 October 2019
We use cookies to ensure that we give you the best experience on our website. If you continue to use this site we will assume that you are happy with it.Ok