There’s a single shot in the very first episode of American Gods that only lasts for a second, if that. Our protagonist, Shadow Moon, hangs from his neck by the branch of a tree – mobbed and beaten by a group of faceless (literally, they have no faces) goons. Drenched, the rain pours down around him in super slow motion, each drop glistening in the lights, as a pink hue gradually begins to brighten the screen oh-so slightly.

We will find out that the hints of pinks and reds belong only to the brutal ultra-violence that will inevitably follow. But in that moment, in that shot that is only seen for a second, is a divinity; a calm stillness. 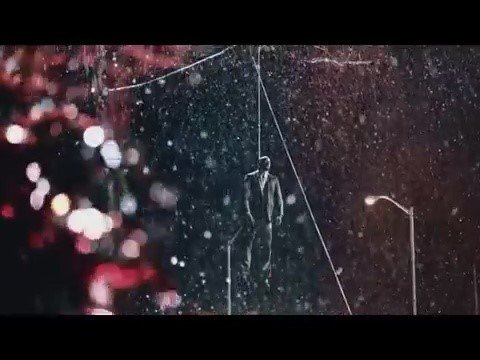 It’s a shot that’s been stuck in my memory since I first saw that episode, for its contrasting power and beauty. In a scene that could be so very offensive if handled poorly, it instead comes off as a shot with striking confidence (not to mention, an unfortunate sense of relevance…) while purposely using only a limited colour pallet to not be distracting.

Very much like the show at its best, this particular shot plays like a comic book panel, and one even the best of artists would be proud of.

People At the Front May Get Wet

This is an early example of but one of many scenes and set-pieces where American Gods will go on to utilise this theme of water – something that, as the series progresses, we will learn it relies on. An element it uses again and again in most episodes like an abusive relationship.

VFX designer, Kevin Tod Haug, referred to the Cinesite VFX team behind the show as “stormtroopers’’ when mentioning the efficiency of their weather effects. He went on to say how “the ominous storm, an essential recurring element, was treated like a main character”.

Throughout this series, characters often find themselves in these watery graves:

There are even scenes that don’t involve grisly deaths, like when Ian McShane’s Mr Wednesday gets out an umbrella to cover himself from a shower are effortless and so special.

The Shaping of Water

Perhaps the most stand-out and memorable scene in the whole show comes when we are introduced to the lower decks of a slave ship. Suffocating in how intimately it is mapped out, the slaves meet a tricky, charismatic and oppressed God in the form of “Anansi” (played by Orlando Jones – spectacular).

He rallies the slaves, urging them to rise up against their oppressors above deck. Air is tight, and the scene bubbles up to the surface as the poor slaves are coerced and persuaded in to revolting against their captors.

It’s a moment that relies on monolog, driving the narrative. We become hooked, submerged in this scene, as the interior shakes and drifts around us on the choppy ocean. Subconsciously, the filmmakers still have us feeling the water around our ankles, the tide ready to come in at any second and sweep us away.

On a very literal level, the use of water also makes everything so much gloomier; and through that manages to create its own dank atmosphere, its own world-ambience. Just in the same way that so many of Shane Black’s pictures take place at Christmas (as an obvious means of being able to clash family wholesomeness and snow amongst its forefront violence).

You can actually feel sodden while watching many of the water-laced scenes of American Gods. They present a very literal coldness, a sad loneliness. American Gods is like the most accurate of weather presenters – informing us of what type of day we’re bound to have and forcing us to have it at exactly the time it intends to.

A Splash of Holy Water

Such a heavy focus on H20 is bound to be in relation to the show’s devotion to the world of faith and religion; piggybacking off the ancient Egyptians, Islam, Christianity. Easily, we could cite Moses parting the Red Sea, Noah, the blood of God, or any simple baptism, just as an easy go-to. By the time the Easter themed finale came, this bizarrely plotted route that the show has taken us on even felt like its own quirky pilgrimage to a promised land.

Whether or not this water trend will continue now that the show finds its way off of the Amazon Prime (rivers) and on to the choppy seas of Starz (read this troubling THR report on S2), I personally can’t wait for a fresh walk in the rain.

Are you looking forward to the new season? American Gods Season 2 debuts this Sunday on Starz. Get your wellies on.

If you enjoyed this article, please consider checking out more of our TV coverage.

Share
Facebook
Twitter
Pinterest
Linkedin
ReddIt
Email
Previous article“Serial Cheat”, Interview with Director Anthony Sutcliffe
Next articleHow to Survive Avengers Endgame: Tips for Making it Through Avengers 4
Jon Holmes
Jon Holmes is a writer based in the UK. Alongside his work writing for film, he is a multi-accoladed filmmaker in his own right, and also performs. He can be followed on Youtube at Hans HS and on Twitter on @jonnyjonjon1