Manzur Iqbal, AKA Futurecop!, is an artist from the UK creating futuristic and cinematic sounds in the synthwave genre. We chatted.

FinalBoss: How did you first start “Futurecop!”? Your bio says that you had no previous music experience. What made you decide to find some?

Futurecop!: Around 2005 I heard the track In My Arms by Mylo. It really opened my mind to electronic music – before that, I didn’t like electronic music, I didn’t even care much for Daft Punk. He used 80s sounds with modern drums so people can dance to it. I just fell in love with this style. His album was amazing, then Justice really made me fall more in love with their style. They used something retro with, again, modern beats. I think both these bands made me listen a lot to 80s music. I just fell in love with the sounds and the uplifting elements to a synth sound. I always felt like producing something like this and I stumbled upon an interview by Mylo about his production and how easy someone can do it with a copy of Reason. So I bought a copy and the rest is history. 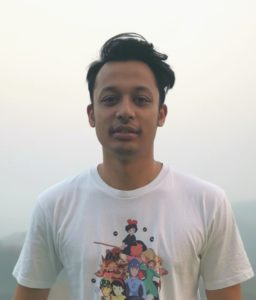 FB: And how did you decide on the name? That exclamation mark is definitely there, huh.

FC!: The band started off a little joke actually on MySpace. The exclamation mark was just something to show a little fun… Lots of bands were doing things like that then. To be honest, I never thought it would last so long, it was just a joke thing at first. That’s why the name is a bit funny.

The band started off a little joke actually on MySpace, the explanation mark was just something to show a little fun…

FB: Your latest album, Voltrana, was released this year. How would you describe the sounds and themes of that? It’s quite mellow.

FC!: Well I would say it’s a progressive sound. I tried to uncover the deep elements to not just the sounds but the emotions and feelings of why I was making it. It was more that just nostalgia I realised. So after reading about consciousness and mysticism, I discovered this new atmosphere I wanted to create. It travelled from 80s Japanese pop to Studio Ghibli then to Zen Buddhism, Sufism and Taoism. All the elements of these findings are in there. That’s why the album is very epic.

FB: Synthwave had a massive resurgence over the last few years, why do you think that is?

FC!: Because the music is amazing. Plain and simple.
It’s a branch of electronic music that’s very easy to listen to yet so electronic. The synth instrument is just as big as a guitar. Music by guitars lasted for decades and synths are just the same and will last forever. It’s not even an 80s thing, it’s an evolution. Just like Bob Dylan to The libertines, or Jimi Hendrix to Nirvana. 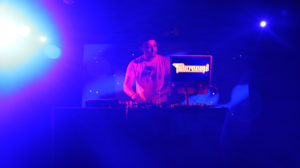 FB: You’re an English artist. Europe as a whole seems to have been integral in this synth movement – with creators like Carpenter Brut (France) – why do you think the US was a little slower to the party?

FC!: I’m not sure about that. I’ve gone through Synthwave when it wasn’t even called synthwave. I think it started with Daft Punk “Discovery” album then Mylo, then College (Valerie), even bands like The Killers and MGMT… around the time we were playing our music too. I would say ours was more defined to the 80s as well as the Valerie crew. I think it’s always been there, it’s very French electro-influenced too but it’s just now become a sub-genre name.

The US had loads before, like Miami Nights 1984 and D/A/D. I guess it depends on how much you communicate with the Synthwave community. But I would stress that even in Synthwave there’s even more sub-genres – the music I do is way different to a lot of others who are called “Synthwave”. It just means it’s going to grow.

FB: The Synth corner seems to really want to help out its fellow artists – with various other creators happily featuring on various tracks on your own albums (I’m a big fan of Timecop1983). Is it a bit of a club mentality? How do you approach these performers, or do they come to you?

FC!: I think it’s an organic thing. When I discover someone doing music similar to mine, I love it and want to push it through. We all approach each other because we love the style and we find those who don’t even call themselves Synthwave… and as soon as we meet, they find out about a community like Synthwave and so promote the genre too.

I think it’s an organic thing, when I discover someone doing music similar to mine. I love it and want to push it through.

FB: You have a self-professed love of the 80s. What’s your favourite film from that era?

FC!: Too many! When I first started it was films like Back to the Future and The Goonies, now it’s become films like At Close Range, Empire of the Sun, Field of Dreams, The Last Temptation of Christ, Ran, The Mission, basically more epic films from the 80s: you can feel that in the new album too.

FB: And your music, like lots of synthwave, it really would lend itself to a soundtrack… Is that something that you would ever be interested in?

FC!: Of course! It would be my ideal way of making music in the future.
Futurecop!’s latest album Voltrana is out now, while Futurecop! can be followed on his Twitter, and his Facebook.
If you liked this article, please check out more of our interviews!
Share
Facebook
Twitter
Pinterest
Linkedin
ReddIt
Email
Previous articleLive from Hell: Michael Vs Jason: Evil Emerges’ Fan Film Director Luke Pedder
Next articleCRUSHING IT: An Interview with Sketch Duo Greg & Lou

The Batman Who Laughs: An Interview With Monkey And Apple’s Raul...