Having been in the filmmaking industry since the early 90s, Teo Smoot has seen a lot of what goes on in Hollywood. Via email, we talked about his infamous whip scene from Starship Troopers, (sort of) working with Pamela Anderson and even a bit of nude sun bathing…

As expected, Teo’s a really cool guy and FinalBoss are so happy to be able to feature him.

FINALBOSS: How did you first get in to the industry? Was it a case of Who You Know?

TEO SMOOT: The complete opposite, actually. I was a musician/song writer gigging around the Washington, DC area where I grew up. Decided to move to LA to pursue my career – never imagining film and acting in any way. While in Los Angeles, some girl I met.. her ex-boyfriend was an amateur photographer who liked my look and asked if I would do a nude shoot (yes, NUDE!) with the ex. I agreed, we went to a nude beach and did the damn thing! It was fun, respectful and creative. It got me curious about modelling. I would then go sign up at a model agency, get my first gig (Newport Cigarettes) in my first week!

I started getting gigs before I even had an agent.

My second gig involved commercial filming in part with the photo aspect. And, I was again intrigued enough to start crashing auditions that I would hear about. I started getting gigs before I even had an agent.

FB: You’ve had such a long career. Is that luck, or self-motivation, or both?

TS: I don’t think any of it was luck, to be honest. I was always the “entertainer-type” amongst my family and friends. Just never imagined turning it into career… until it happened. I had been preparing for it my whole childhood, just didn’t know it. Even my pursuit of music only started after seeing The Jackson 5 on TV.

FB: Tell us about your production company, Cool Room Entertainment.

TS: Well, I started The Cool Room to further my aspersions as a writer/director. I had spent the last few previous years watching some of the best apply the trade and felt I could/should give it a shot. The 2nd biggest reason/goal was to see more diversity in the entertainment world.

FB: You worked with Paul Verhoeven on more than one occasion, what’s he like?

TS: Working with Paul was great. He’s a very easygoing, energetic director who has a clear vision and knows what he wants from you and from the project. That’s the kind of director you want to follow into the battle of filmmaking.

We met on the set of ‘Showgirls’ after I was cast from a video-taped audition. He was one of those creative geniuses that cared about his actors thoughts, concerns and contributions to the project. I wouldn’t hesitate to work with him again.

FB: You’ve worked with Pamela Anderson, David Duchovny… you were in bloody Starship Troopers! How many stories do you have, really?

TS: Ha! Quite a few, I guess. Like the fact that in the Pamela Anderson movie, ‘Barb Wire’, I never actually worked with her even though we were in the same scenes. In fact, I was literally the only actor on set when ALL my scenes were filmed to be in a crowded dance club! I did briefly meet her and Udo Kier on set when there were filming their parts.

[paul verhoeven] IS one of those creative geniuses that careS about his actors thoughts, concerns and contributions to the project. I wouldn’t hesitate to work with him again.

FB: What was it like whipping Casper Van Dien in that infamous Starship Troopers scene?

TS: That was great because I had gotten my whip-training from the great Vic Armstrong who not only trained Harrison Ford for Raiders of The Lost Ark but was also his main stunt double.

they put 25 pound sandbag weights on both my feet to keep me still!

A little behind the scenes on that one: No CGI. Casper was really in front (at a safe distance) of me and I had a real whip. However, Verhoeven was getting concerned because I had a tendency to slowly move forward every time I’d lash the whip. In between takes, he’d remind me to stop moving forward and I’d agree, of course, but wasn’t totally conscious of it happening… so, kept doing it it!

Finally, they decided to put 25 pound sandbag weights on both my feet to keep me still and Casper safe! So part, if not all, of that scene is me trying to whip as hard as I could (per Verhoeven’s instructions) and not fall forward cuz I couldn’t move my feet. You gotta love movie-making!

TS: Definitely. We had a blast. Casper is a VERY kind man and a generous actor. In fact, 20 years after the films release, he even invited me to be on the dais with him (and Dina “Dizzy Flores” Myer) at the AwesomeCon 2015 event being held in my hometown. Again, we had a blast!

FB: You were also a Klingon at one point in The Next Generation. What was that like?

TS: My biggest memory of that experience was how organised production was. The people and staff on that show were top notch and amazing. Which made doing the overall experience amazing.

FB: How long were you in make up for that, do you think?

TS: Applying make up was a little over 2 hours. It takes an hour to even take it off. But never having that level of makeup before made it fun and educational. 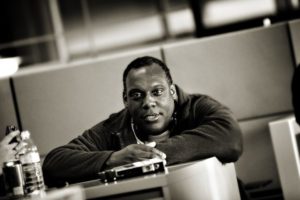 FB: Have you stayed up-to-date with Star Trek since? With Discovery on Netflix, a new series with Patrick Stewart and a Tarantino feature on the way, the franchise is bigger than ever – wouldn’t you say?

TS: I’ve seen all the films but haven’t kept up with as many of the shows. I did do another episode of ‘TNG’, also playing a Klingon in the ‘Black Hole’ episode and a small, non-Star Trek-related short film project with Tim Russ (Tuvok on Deep Space 9 and Voyager).

FB: Finally, what do you prefer then, acting or producing/directing?

TS: Actually, I prefer writing. My first love. Followed by acting then directing. I’m a good producer but learned it as a necessary evil, so to speak. I’d rather someone else handle that headache while I do all the other stuff!

All things Teo can be found at his production company’s website Cool Room Entertainment, or on his Instagram.

Who Are The Bad Batch? FinalBoss Asks

It Takes a Lot to Make a Stew: An Interview with...