Does the new adaptation of Joker leave us with a smile on our faces? Or was it just a joke we didn’t get? 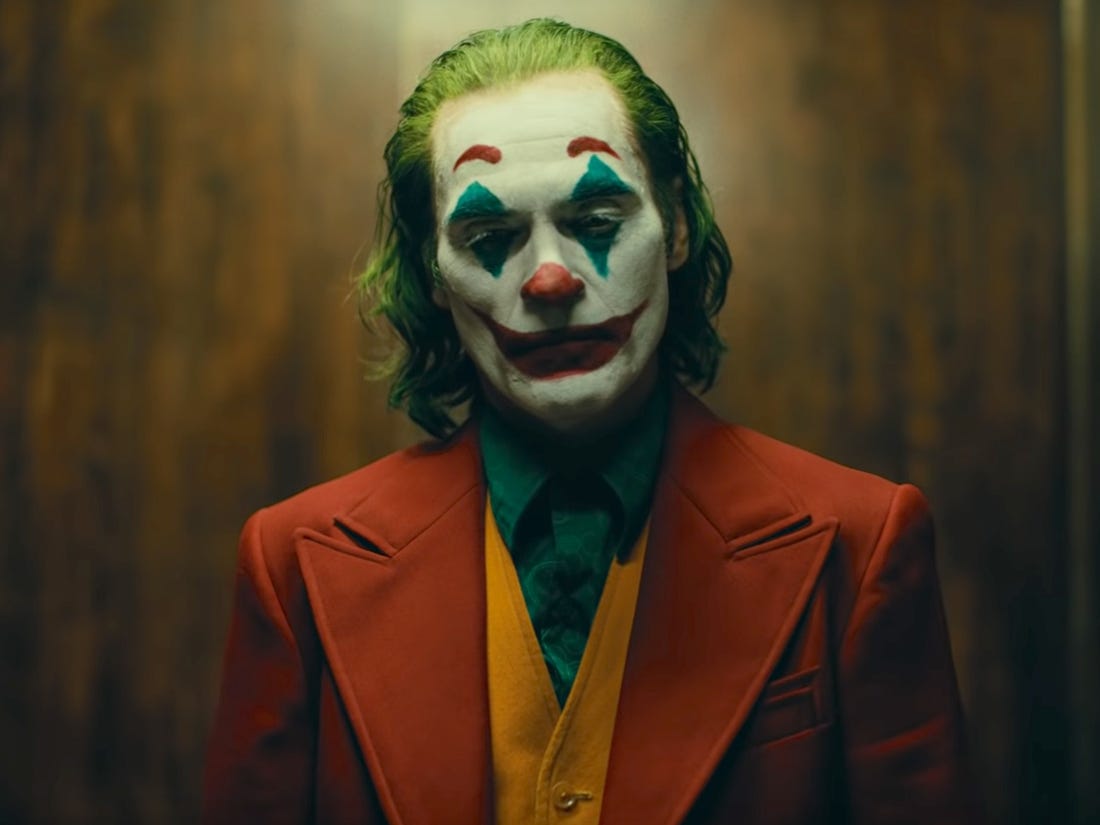 Joaquin Phoenix has made quite the jump from his other hit movies: Her, Gladiator, and I’m Still Here, to be the new ‘happy’ face of the infamous villain, in DC’s Joker.

With an A-List team compromising of director Todd Phillips, (best known for the Hangover Trilogy), producer Bradley Cooper (of A Star is Born, ‘Hangover Trilogy and Guardians of the Galaxy) and writer Scott Silver (The Fighter), there could be almost no faults to such a well-collaborated film. Having said that, it is depicted as a dark, tragically comedic movie that is feels to be a 180 degrees turn from Todd’s usual comedies, so there was always going to be room for missteps.

Being set in the late 70’s/early 80’s, and lacking technology, Joker wasn’t what we were expecting, however this element really sets out its originality and unique style from others in the DC universe. But that’s not the only way it stands out.

It was shown to us early on that these were desperate times for citizens of Gotham City. There were no flashy costumes, over the top stunts, purple Lamborghinis and no beefy set of teeth grills (*cough cough* let’s not talk about that shall we). Instead it was raw, positively uncomfortable and in its own way, a new modern take on the Joker and who he REALLY is.

Joker has received 5-star ratings across the board, is rated 10 by IGN, 8.9/10 by IMDb and has a 68% scoring on Rotten Tomatoes. It hasn’t gone without some harsh critiques though, as well as being controversial movie with deep topics explored. Since it’s a movie that has sparked much conversation, it seems fitting to discuss and review.

Is it Getting Crazy Out There? How it All Begins

Arthur Fleck lives with his mothers and is her carer. He is the main source of income for the pair. Fleck is also prescribed an alarming 7 different kinds of antipsychotics/antidepressants and sees an assigned counsellor who clearly disregards him with the mentality that he is just another name on the list of crazies and degenerates of the world. He has a condition that renders him uncontrollable with fits of laughter, when there has been no joke made. We see the presumption made clear here that if we give people pills to numb the pain, this equals more money and as a result, many are forgotten about and discarded. Let’s just ignore those who seem weird, pretty much!

This unfortunately can be relatable and very true to individuals in today’s day and age. I’m glad that this was incorporated into Joker, as the villainous world is not all glitz and glam (with a hot sidekick or ridiculous tattoos…).

We are introduced to the company that he works for, one that hires clowns out on various jobs around Gotham City. Arthur is an outcast of society, left scrounging for what leftovers he can get, thus he tries his hardest to succeed at this role. Its very metaphorical really, suggesting that he is made out to be the joke, the comic relief in such a crumbling, dystopian society.

As we follow Arthur on his daily routines with his mother and work, whilst trying to make friends with his co-workers, we discover that he idolises late night talk show ‘Murray’ (played by Robert De Niro). With such fascination on Arthur’s face, it is apparent that the world around him stops as Arthur dreams about being on the talk show merely to be recognised for the good he inflicts on others. It cuts to him imagining being on the show, happy and heard; this is probably the only time that it’s bright on screen. In all honesty, the first half of the movie is simply him going to work, taking care of his mother and having relations with a woman in his building. Who may or may not be real?

What is interesting to pick out from this movie though, is the way in which the audience is shown that the city is ‘crazy’, dirty and manic- but not Arthur himself. It is the government who have prescribed him this medication, and nobody wants to help him or his mother. Arthur refuses to see that he is the one in the wrong, just reacting to a failed system that demands he act normal.

Now, the first half is a little slow and there’s only so much that I can take of him laughing hysterically every 5 minutes! However, I loved the fact that Phoenix made me feel uncomfortable watching him on screen and how he placed silence in the whole cinema. With the camera closing in on the contortions of his face as he cackled, down to the snot pouring from his nose, there was something eerily unnerving about it all.

That truly is talented acting!

Transformation: The Turning Point for Joker

“I used to think that my life was a tragedy…but now I realise…it’s a fu**ing comedy”.

There were moments in Joker that took Arthur Fleck over the edge of sanity, one of which is when he is fired from his job. We’re along with him on the journey back home on the subway when he has an altercation with three young middle-class men. As they harass a woman on the train, he laughs manically, and he seems pained with his laughter, leaving the men confused.

He doesn’t do or say anything but with this reaction, these three evil musketeers steer from one vulnerable person to another. It was up to the point of their altercation that we see something snap within Fleck. This scene was clever with the cinematic approach it had, the old subway lights flicker spontaneously with each beating he receives, conveying him flipping the switch on his sanity, deciding on what to do next in his mind.

By this point, the audience are shown that his mental health took a rapid decline and learn that many things we believed to be true and were shown physically, may not be what others can see. The events that take place during these vulnerable moments are crucial, and we develop more empathy for Arthur Fleck. After his butchered attempt of a stand-up performance at a comedy club one night, his act doesn’t go completely unnoticed. Murray’s team from the show pick up this footage and mock him on the show. Murray himself, called him a “joker.” A title he embraces.

The message here is clear, that no matter how badly people perceive us or how deranged we may be said to be, we’re able to spin these words into positives. It was as if there was an internal struggle had finally been released.

Pleasing to The Eye: The Visual Appeal of Joker

Phillips should be applauded for his excellent camera work and chosen positions. It really feel like you’re invading Fleck’s personal space with the use of mid- shots and close ups and the occasional long shot that truly depict his character through movements and disfigurements from head to toe.

Throughout the whole movie, we are closed into the space surrounding Arthur and not allowed to explore outside of this. Phillips did well in giving the illusion that were trapped in the confined space of his mind, like a steal box we cannot erupt from. We get to see the pain behind his laughter to, and even the wrinkles on his pained face.

Just be aware of that, 4k viewers!

In addition to this, the little touches are appreciated. For example, the clown make up is carefully tailored to his demeanour. At first it is precise, but as the movie progresses, we start to see that he becomes careless with his appearance; his lips get smudged and the outlines disappear. This seems like it is almost suggesting that he cannot be contained anymore or keep drawing inside the lines. I found this element personally intriguing, as it felt as though the Joker had fully taken form.

The film was dark and dreary, with a never-ending dark haze looming over the audience. Even when the sun was out; the world still felt grey and depressing, surely not only reflecting the dingy, damp Gotham City we were submerged into, but also what the world looks like through Flecks eyes.

We can conclude that the Government, therapy and medication were a let-down, and the movie being more about mental health than just a mad man killing people, which was needed. Gotham City had simply allowed for Arthur to fall through the cracks.

The death toll did not amount to what I originally thought it would. Instead, it’s more about how Fleck puts meaning to the character and reason for his actions. Although they are undoubtedly wrong, we can understand why he ended up this way, and what has spiralled him to resort to these methods. This is a perspective that we have not seen before. We are made to ask questions like: is any of this real? Can he really be blamed? Was it all on purpose?

The movie was not as engaging as I would have hoped, but it was still pretty good, and I don’t regret watching it. It has an artsy style that might not be everyone’s cup of tea, with an edgy, hipster feel to it. As much as I enjoyed exploring the scenes rather than what was happening, I just didn’t understand it at times. Some moments felt slow and long, and honestly I expected more violence. I was waiting for something extreme to happen. Above all else, I had an expectation of what or who Joker was, and was a little let down by not seeing that. Clearly my expectations were altered by watching this movie and I questioned previous retellings of Gotham’s finest, but going in, I wasn’t prepared for what I got.

Maybe that is because this movie did not focus on Batman defeating Joker (Bruce was a child in this version, too young to do anything) but on the transformation that was taken for us to finally see behind the scenes of who Joker/Arthur is. This Joker was no laughing matter and hit the mark with professionalism and just knowing what had to be done (it might have saved DC and their previously failed movies). This was a form of the Joker that was finally listened to…

This article was written by FinalBoss contributor and social media manager, Demi Che Foster – Want to chat to Demi about her article? Fire over a tweet!

How To Survive The Lord Of The Rings Movies

Jackass Forever – Because a Trilogy Is Never Enough