If you were an American student from the 1980s to the 1990s, chances are you played one of the original versions of the game Oregon Trail.

An educational game where you took the role of a party of settlers who journey from Independence, Missouri towards Willamette Valley in Oregon, it was one of the most memorable aspects of elementary school for countless students of the time. Who doesn’t remember their characters dying of dysentery or drowning trying to ford a river?

The new Oregon Trail by Gameloft offers lots of what made the original game (and its many remakes) special while adding tons of other content to play through.

It also brings another, even more, significant change to the series: it features playable Native American characters who were developed alongside scholars from different tribal backgrounds and, at least to an extent, acknowledges that for the indigenous people who originally lived in the land the real Oregon Trail passed through, this period of time involved genocide and land theft.

At least their frozen corpses will be adorable.

For a game about a bunch of dirty travelers sleeping in carts pulled by even dirtier oxen, the game is very cute. The majority of the game is 2D, although it’s accompanied by 3D character portraits and short clips of the villages and forts you visit when you first arrive.

The 2D art is lively and colorful, and it manages to hold your attention as you watch hours of your party slowly moving along the trail. It feels like you’re traveling through the real Black Hills, but with fancy Super Nintendo goggles.

I’ll trade you 40 hardtack for whatever you’ve got in that pot right there.

The 3D cinematics help make the trade hubs feel more lively. You get to see the forts and trade outposts lined with wagons and Native American dwellings that change depending on which tribes are present in the area, like Tipis when you’re in Lakota country.

The animation helps the game show you parts of the story instead of relying solely on text. Whether it’s the gleeful jump your character does when reeling in a fish or the hunching over, about-to-have-diarrhea motion that accompanies catching dysentery, there’s constant movement in the best of ways.

Trading her dress and bonnet in for a more rugged look.

The only real complaint visually is that there’s a set number of models and portraits that repeat throughout the game. There are also minor things like your characters, male or female, turning into the man above when they go out hunting.

This is the most comprehensive version of the Oregon Trail yet.

The main game contains forking paths that give you different trails to explore each playthrough. You run into NPCs who give you missions that play out differently depending on the choices you make, like helping reunite a group of Union soldiers called the Dragoons or befriending a little girl on her way west with her family.

You can also play through different Journeys, scenarios containing specific game conditions, telling stories using premade characters. For example, you can play Bitter Winter, a Journey where you take the role of a settler named Thompson as he tries to find his companions who were lost in a horrible snowstorm.

One of the best side quests: Knives Out, Oregon Trail-style.

There are even weekly challenges you can play together against the rest of the community. Particularly good at the rafting mini-game or fishing? Now you can go online and rank #1 on a leaderboard.

On top of all of this, there are achievements and unlockables as well as an encyclopedia.

As you play the game, you unlock currency to buy songs, artwork, and even filters that can change the look of your trek on the next playthrough. Being bitten by a snake looks even better in sepia.

You also unlock achievements depending on the actions you take in the game. Considering the Switch itself doesn’t have its own achievement system, it’s a really nice addition that adds extra life to the game.

The encyclopedia achieves the same effect by helping flesh out the backgrounds of the characters you meet, sharing historical information about the Oregon Trail and the peoples who lived on the lands it passed through as well as the settlers who traveled it, and more. 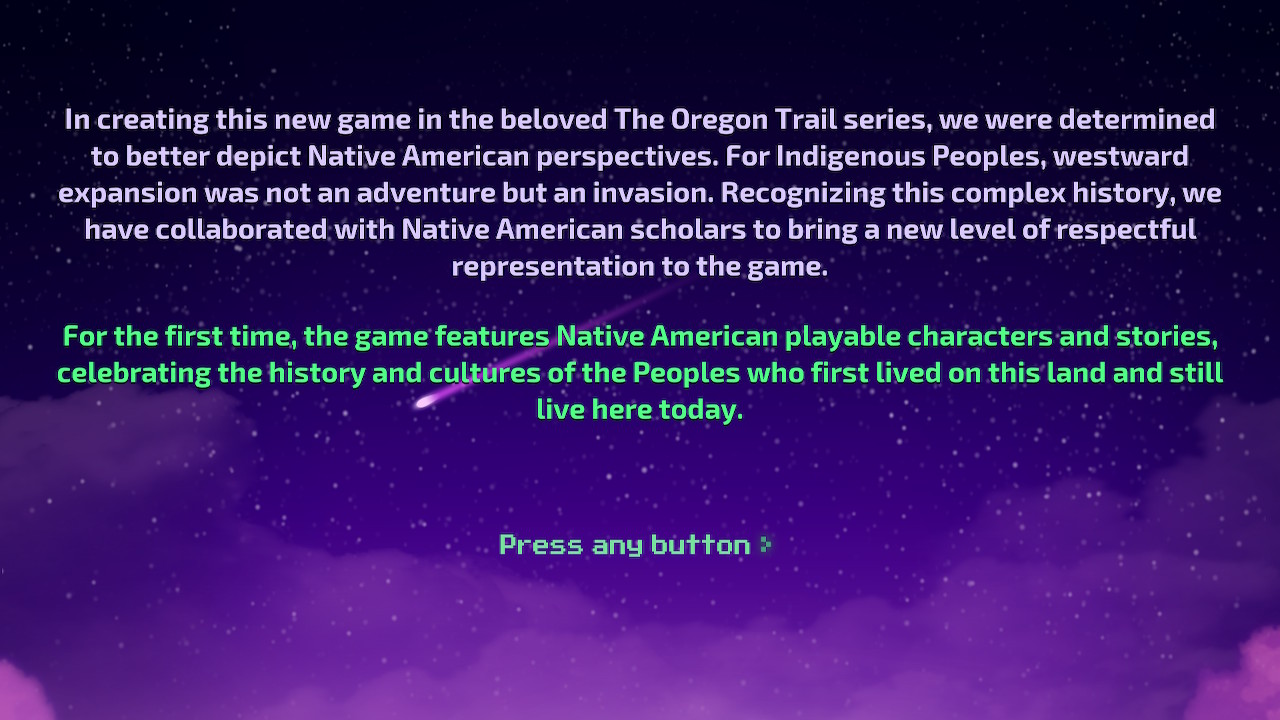 Time for the serious business part of the review.

When launching the game, one of the first things you’re presented with is the screen shown above. From this moment forward, through nearly every step of the game, you’re presented with a more diverse Oregon Trail experience – there are both White and Black settlers alongside Native Americans from various tribes, like the Lakota, Crow, Shoshone, and Pawnee.

While the previous games had Native American characters in them, they were portrayed stereotypically and more like game events than people. Now you can play as them in the main game as well as in Journeys like Pushed West, where you play as John and Annie Halfmoon, a Lenape father and daughter, who are looking for their son/brother as they get pushed out of their ancestral lands by White settlers.

Likely a subtle reference to the purposeful mass killing of buffalos (tatanka) led by the U.S. government to deprive the Lakota and other plains tribes of one of their main food sources.

For those that don’t know much about the history of the real Oregon Trail, it was a major part of Manifest Destiny, the idea that it was the destiny of White, Christian Americans to expand throughout North America and take the land from the indigenous people who inhabit it by God’s will. Many of the reservations of today were built on the removal of the tribes from their land in this time period, placing them into small allotted lands that only got smaller over time as the U.S. government broke treaty after treaty and shrunk the size of reservations.

There is some dissonance between playing this game in its more respectful form and knowing the actual history of the Oregon Trail. Even if it acknowledges the tragedies these tribes went through during this period, you’re still playing a game that turns this period of history into a fun adventure. As Dr. T.J. Tallie puts it, you’re still “cosplaying conquest.”

That being said, the devs and the scholars who worked on the game deserve credit for the work that was put into it. They made the tribal characters feel human, they incorporated tribal languages into the game, and they centered this aspect of the history right from the start of the game instead of shying away from it in fear that some aspects of the gaming community might feel like it’s “too woke” to acknowledge what happened to the people who were here first.

James doesn’t sound like a very good friend, to be honest.

The developers also incorporated some of the treatment Black people faced along these trails. At the time, Oregon was ironically progressive in the sense that it made enslavers free enslaved people once they reached the territory, but it was also illegal for them to live there and punishable by lashing and, basically, enslavement once more. This is touched on a little bit in the game through character dialogue.

The game When Rivers Were Trails deserves a shoutout if you want to play something similar to the Oregon Trail but completely from the perspective of an Anishinaabeg (Great Lakes area tribes) in the 1890s. It was made by an Indigenous creative team, overseen by the Indian Land Tenure Foundation, and supported by the San Manuel Band of Mission Indians.

The Oregon Trail Nintendo Switch: All in all, unless you’re feeling particularly nostalgic and want to play one of the original versions to relive your childhood, this is the go-to version of the Oregon Trail and will provide you with hours and hours of replayability, whether it’s by playing the main game over and over to explore each forking path, by playing the Journeys to live through the stories of characters like John and Annie Halfmoon, by trying to reach the highest score on the leaderboard, or by trying to unlock every last filter, song, and piece of artwork the game has to offer. It also gives an important platform for lesser-heard perspectives that weren’t represented in previous iterations of the game. – Joey

That does it for this review of the Oregon Trail for the Nintendo Switch. What do you think? Do you agree or disagree with my verdict? While you’re here, you should check out my recent Kandria review for another solid game to play.

Kandria is a mix of a few different genres...
Read more
Gaming

It's no secret that the gaming industry is constantly...
Read more
Gaming

If you’re trying to get your Psychic Badge at...
Read more
Gaming

Are you about to tackle the Ghost Badge...
Read more
Gaming