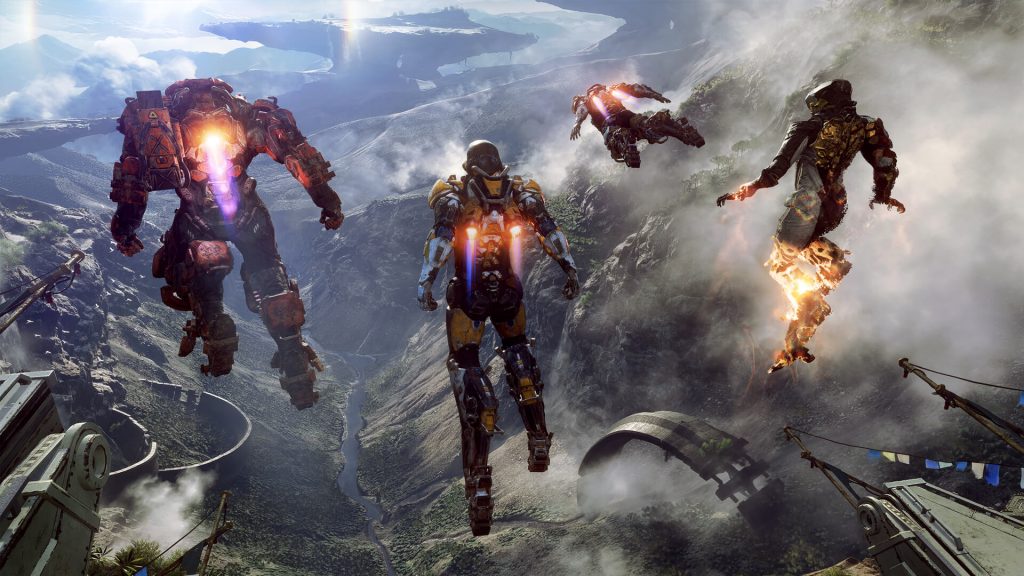 Bioware’s newest creation, Anthem, releases on PC, Xbox One and PS4 February 22nd. We’ve been teased with this title for a while, getting our earliest look in June of 2017 at E3. Now the masses have finally had a chance to jump in and play this sprawling third-person shooter, in an open beta that took place over the weekend. At FinalBoss, we dove in to get a feel for the game and answer a question we’re sure you are asking:

Should I buy Anthem?

We won’t bore you with a laborious in-depth analysis of the inner workings of the game. We’re sure you just want to know if it Anthem is any good or not. So here’s what we think.

Update – If you’re looking for a longer, more in-depth look at Anthem, we’ve covered it in a video review post-launch. You can see our full-length Anthem review here, or keep reading for a snappier take on the game!

The Shining Stars of Anthem

The gameplay mechanics of Anthem are definitely its highlight. Your mech-suit or ‘Javelin’ has all sorts of abilities, from soaring around the open world to frantic dashes. You have a lot of options for movement, which feeds in the combat that we’ll mention in a moment.

It’s quite a refreshing take on the shooter genre, giving you more versatility that most mainstream titles. With all this in mind, the amount of options available does make the controls system a little janky at first, as there are so many manoeuvres to pull off and things to do, but once you get to grips with them, it’s fairly smooth sailing.

Anthem is heavy on the classic RPG customisation, allowing you to bolster your character with new weapons, gear, power-ups and the like. That isn’t exactly groundbreaking, we know, but what’s so great about Anthem’s customisation is the balance it offers.

Anthem is rich and diverse enough to give you a wealth of options, letting you shift things like classes based on playstyle or change up your loadout with relative ease, all without getting bogged down in confusing systems that take you hours to master. You can easily get to grips with Anthem’s customisation, yet it’s expansive enough that will likely provide reasons to come back to the game long term.

The combat system in Anthem brings together the gameplay mechanics and the customisation options, blending them brilliantly into a fluid and interesting format.

You’ve got numerous special abilities, gun types and power ups that can really change the flow of combat, while the manoeuvrability of the Javelins lends itself to new and exciting ways of engaging enemies. Combine this with a decent variety of hostiles to eviscerate, and you’ve got something that feels quite different from other shooters out there.

A great example of this is when picked up a sniper called The Devastator. It had limited rounds, but packed an explosive punch, allowing us to drop large enemies while allies picked off weaker foes. It brings an element of strategy to the combat, making you think about how best to kit out your squad for maximum destruction.

The World: This game sports an epically scaled open world. It has to be really, to support the flying mechanics and near-endless encounters with enemies. Still, it’s well designed and beautifully rendered. It won’t blow you away or drop your jaw, but it definitely isn’t to be scoffed at either.

The Story: Anthem really isn’t a game that is going to rely too heavily on narrative. It’s a beefy shooter with RPG elements, not The Last of Us. A good plot would be nice, but it’s really too early to tell at this point. The beta doesn’t give away a lot. So far, it seems like your standard sci-fi fable though. Engaging enough, but fairly forgettable.

The Multiplayer: There is no competitive multiplayer in Anthem, as of yet. So if you’re asking yourself if you should buy Anthem and you’re core interest is online action, look elsewhere. However, you can link up with people to do missions and objectives, and doing so is utterly seamless. A nice touch that adds to the fluidity of the game.

Is Anthem Any Good? Where The Game Falls Flat

There is only one place where Anthem really falls flat, and that’s the actual gameplay itself. We played for hours, and all we did was move from one seemingly aimless objective to the next, clearing waves of enemies before heading further into the mission to slay even more waves of the exact same enemies. What does this mean?

It means Anthem essentially feels like a gear grind.

There is so much diversity in what it offers in every other category, but when you get down to the core way you play, it’s really, really repetitive.

The Verdict: Should I Buy Anthem?

This is a tough one.

Whether or not Anthem is any good depends on how you like to play. Anthem is a game where if you sink a lot of time into it, becoming a master of the Javelin’s controls, building up incredible loot, and grinding your way to top-tier glory, you’ll probably get a lot out of it.

However, there is that word again: grind. Sometimes Anthem felt like a bit of a slog, and we’re talking a slog experienced in a handful of hours over a few days. As you start to get into this game, the repetitive nature is probably going to wear on you quite quickly.

If you’re the kind of gamer that likes the slow-burn, if you’re in this with a group of friends who’ve got hours to inject into the title to get every morsel out of it, then should you buy Anthem? Definitely. If you’re the kind of gamer that plays alone, or likes to sit down on a Sunday evening to play for an hour or two, Anthem is going to give you very little in the way of satisfaction, and we’d probably advise you avoid it.