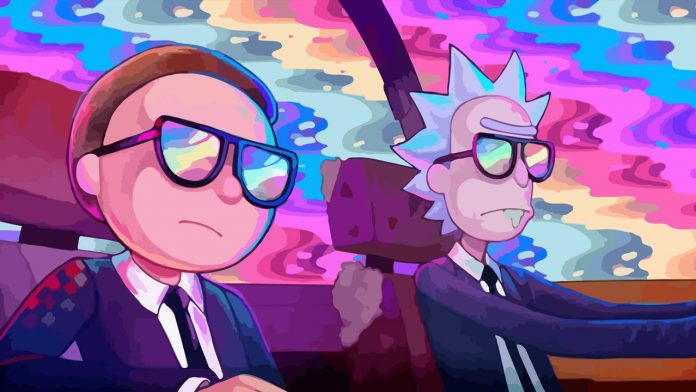 Rick and Morty is a rising animated star — would have been a correct statement two years ago.

Despite its lack of familiarity in the UK, Rick and Morty is enormous in the US and slowly reversing the tides of history by colonising much of Britain as well.

Rick and Morty is a show that toes the line between indie and mainstream, and by that we mean, it feels weird and eccentric, but is actually a major production with upwards of a million dollars in funding per season.

We all watch Family Guy for the fart jokes and random cutaways, and Game of Thrones for the intrigue and vicious stories of love and violence, but to nail down a simple reason to watch Rick and Morty is far, far trickier.

By now the new season is likely taking over your social media feed, leaving you with a question as deep and complex as the meaning of our own existence: should I watch Rick and Morty?

Not that we’re biased or anything, but we think you should.

Because of that multilayered…ness I mentioned before. There are so many different enjoyable elements that Rick and Morty brings to the table that you’re bound the like one, even if you don’t much care for the others.

Obviously, anyone reading this has not watched the show, so we’ll avoid major spoilers. We’ll use some examples of scenes in the show to try to convince you to watch it, but this isn’t a serial drama, it’s not like we’re going tell you that Glenn dies or anything.

This Dark Comedy is Truly Twisted

We’re all just a bunch of sick puppies.

Lucky for us, the writers of Rick and Morty are masters of the dark comedy. If you enjoy humour that shocks, offends and delights in the most upsetting of ways, then we’ve already found a reason for you to watch the show.

My particular favourite example of Rick and Morty’s dark and twisted nature is a scene in which, upon being told it cannot physically harm anyone, Rick’s hyper-advanced car resorts to psychological warfare in order to protect Summer — a main character on the show — who is currently within its care. You can see how this demented scene plays out in this clip:

Yes, I’ve already mentioned the dark humour of this show, but that isn’t all it has to offer. Rick and Morty is packed full of stupid, silly humour and fart jokes.

The character Rick burps with every third line, the show visits planets made of butts and worlds where chairs sit on people, you also get ridiculous episodes like ‘Interdimensional TV’ which is basically an entire episode ad libbed by the cast, saying a bunch of stupid shit. They also enjoy poking fun at Sci-Fi elements from other TV shows, offering ridiculous names for insane contraptions, subverting worn-out tropes, etc.

There is also an episode where a character is literally called Fart. It’s hilarious but the lowest of lowbrow.

If you enjoy ridiculousness, love to laugh not because the joke is clever, but because it’s just stupid and funny, then Rick and Morty is definitely worth a go.

Sometimes you just want to sit back, relax and enjoy some light entertainment. The kind of show that gives rise to the theory that your brain is actually more active when asleep than watching the bloody TV.

If that sounds like you, tired after a long day of work and no energy for the intensity of something on Netflix with way too many damn plot points and back stabbings, then Rick and Morty is exactly what the doctor ordered.

Rick and Morty is filled with fun sci-fi buffoonery.

It’s a show that doesn’t take itself too seriously, and sure, it does have more complex elements, but they lay below the surface, adding a deeper level to show without impacting the way it plays, feels or is enjoyed.

You can watch this show like you watch any cartoon, brain switched off and just there for the laughs, or you can take it further and enjoy the subtle undercurrents and messages beneath it.

The point is though, you can do either.

It’s not like Westworld, where if you aren’t paying attention for a moment you’ll get lost in a sea of complexity, wondering if you’re watching a human or murderous android.

If you just want to chill, Rick and Morty is a great way to laugh off a hard day.

It’s a Goldmine for the Theory Obsessed

What if you don’t want to just switch your brain off though? What if you want to delve deeper into this crazy sci-fi world?

At THG we love spinning theories, from Game of Thrones to Westworld, we just bloody love it.

It’s exciting, to look beyond what we know and try and find deeper meaning and context in the stories we love. To answer the questions and mysteries we are so desperate to unlock.

Rick and Morty is full of these little breadcrumb trails that could potentially lead to nothing — or maybe something a whole lot bigger than we’ve been lead to believe.

If you, like us, enjoy trying to unravel the hidden details of a show, taking away more than just what you are told, then Rick and Morty is the perfect show to feed your crackpot theory addiction.

It’s Not a Cartoon Version of Back to the Future

Now that Rick and Morty is less of a cult hit and more a mainstream superpower, I find myself having to make the argument to watch the show less and less.

Still, whenever I do end up in a conversation with somebody unawares of what the show is all about, I find myself faced with the same bloody question. Isn’t it just a Back to the Future cartoon?

Yeah, it is true that Rick and Morty is based off an animated parody of Back to the Future that creator Justin Roiland made.

And yeah, you have Rick, who is a mad scientist that looks strangely like Doc.

And, yeah you have Morty, who is just one vowel away from Marty.

And yeah, it is also a sci-fi that involves travel through time, but I mean, that is where the similarities end.

Okay fine, I understand where this question comes from, but in all honesty, you will not find yourself thinking of Back to the Future every time you watch an episode.

This is not some sort of spin-off or homage, Rick and Morty is its own entity, with its own style, themes and, most importantly, creativity.

If you don’t care for Back to the Future, or have never watched it, Rick and Morty is still something you can get into. And if you’re worried Rick and Morty will ruin your love for the movies, have no fear, it’s nothing bloody like them!

Want more THG content? Visit our other pages for more articles on the top TV series of 2017!

How To Protect Yourself Against Phishing Attacks