The One With The Best Friends Thanksgiving Episodes

Friends Thanksgiving episodes are some of the series best. The last Thursday of November marks the start of the holiday season, leads into the Black Friday weekend shopping blitz, sees the Detroit Lions and Dallas Cowboys hosting NFL games and for 10 years from the mid-90s saw some classic episodes of one of America’s favourite sitcoms.

As is tradition for a Friends Thanksgiving episode the gang are gathered at Monica’s for dinner. Phoebe is hiding her friends dog, though not very well and everyone soon knows of the pooch’s presence. This leads to the revelation that Chandler hates dogs. And Ross hates ice cream. Rachel is preoccupied by the arrival of her assistant Tag, who is fresh from a breakup. Too soon to ask him out?

The highlight of the episode is Chandler setting a game of name all 50 states. Ross mocks the others for their failure and then spends the rest of the episode driving himself insane as he can’t complete the game himself.

The One With Rachel’s Other Sister (Season 9)

Rachel’s sister, the very unlikeable, Amy makes her first appearance and immediately bonds with her niece Emma. (Or Emmet. Or Emily.) Much of this episode revolves around who would take care of Emma in the event that something happened to Ross and Rachel, and arguments ensue. 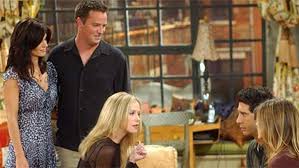 Monica, at Chandler’s urging, reluctantly agrees to use the best china, a wedding present she was saving for the Queen’s visit, for Thanksgiving. She spends the episode trying to prevent the inevitable disaster.

The One With The Late Thanksgiving (Season 10)

Having hosted Thanksgiving throughout the series Monica decides enough is enough and she won’t do it this year, much to the dismay of the others. However, it takes about 10 seconds for Phoebe to manipulate her into cooking as usual. Only, Phoebe and Rachel decide to enter Emma into a baby pageant. Joey gets tickets for the New York Rangers and understandably he and Ross find the pull of live sport hard to resist. This makes the foursome all late, resulting in Monica and Chandler locking them out. Joey gets his head stuck trying to get in and crashes through all the food as he pushes through the door. No one cares though, as Monica and Chandler get happy news from the adoption agency.

Season 2 is brilliant but this episode finds itself at the lower end of the list, not because it’s bad but because it’s not especially Thanksgiving-y.

The Thanksgiving angle comes via Monica’s attempt to find a new job. She agrees to come up with some mockolate (a synthetic chocolate) recipes with the aim of making Thanksgiving the ‘mockolate holiday’.

It is an important episode in the development of Ross and Rachel though. After they kissed at the end of the previous episode the majority of the time is devoted to the aftermath. Ross has a decision to make, Rachel or current girlfriend, Julie. Chandler and Joey encourage him to make a list of each’s pros and cons, mostly to put Chandler’s new computer to use. After Ross chooses Rachel, she finds the list and the relationship is off before it has started. The episode ends with a great scene involving U2’s With Or Without You on the radio.

The One Where The Underdog Gets Away (Season 1)

The first Friends Thanksgiving episode is our introduction to the Friends Thanksgiving experiences. Ross is disappointed to find his parents will be absent so Monica steps up to cook the traditional dinner. She caters for Phoebe and Chandler, who hates Thanksgiving due it being when his parents told him of their divorce, and eventually Joey and Rachel too. Joey’s family uninvite him after he appears on ads warning of VD, yes they really do, and Rachel is forced to stay after her plans fall through.

When a giant inflatable dog breaks away from the Thanksgiving day parade, the gang rush to the roof to witness this momentous occasion. And lock themselves out. Dinner is ruined and tempers flare before they all realise that a life where you can hang out with your five best friends is worth being thankful for.

The One With The Rumor (Season 8)

At the time this episode was made Jennifer Aniston and Brad Pitt would have been the biggest celebrity couple around so getting Pitt to guest star was genius. Having him play a character (Will) who hates Rachel was even more brilliant. Will is an old school friend who Monica bumps into and invites for Thanksgiving. He was good friends with Monica (both fat) and Ross (founders of the ‘I Hate Rachel’ club). It turns out that the guys started a mean rumour about Rachel. She had started one about Ross, though that turned out to be true.

Elsewhere, Monica doesn’t want to cook a turkey but Joey insists that he will eat it all to make it worthwhile. Because that’s what Tribianni’s do. It takes a big effort but he manages it and still has room for pie.

The One With Chandler In A Box (Season 4)

Chandler gets his name in the title and takes centre stage in this classic Friends Thanksgiving episode. He has incurred the wrath of Joey for kissing Joey’s girlfriend Kathy. To gain forgiveness Chandler spends Thanksgiving in a box, leading to an awkward meeting with Kathy before Joey releases him from his punishment.

Whilst this is happening the group are looking towards Christmas and attempting to organize secret Santa. Like all secret Santa’s, it’s not very secret as they negotiate over who gets who, leading to the revelation that Rachel exchanges all gifts, much to Ross’s fury. Big dog?

The other main storyline involves Monica, who gets ice in her eye (“Maybe you should put some ice on it!”), and finds her eye-doctor is the son of Richard, the love of her life. That doesn’t put her off though and she invites him to Thanksgiving dinner. When the others question this she gives one of the all-time great Friends speeches

The One Where Ross Got High (Season 6)

Once more Monica is hosting Thanksgiving and this time she’s invited her parents. Only Jack and Judy don’t know that she is living with Chandler, because they hate him, as they believe he got high at their house. Chandler tries to win them over and Monica attempts to convince Ross to confess that it was in fact he who was trying drugs.

Meanwhile, Ross and Joey are trying to escape dinner so they can hang out with Joey’s new roommate, Janine, and her dancer friends.

The highlight of this Friends Thanksgiving episode though is Rachel being given responsibility for desert. She chooses to make a traditional English trifle, complete with sponge, jam, custard and beef. With Monica opting out of making a backup the group suffer through it, though Joey is a fan!

The One With All The Thanksgivings (Season 5)

Two indicators you’re in for a good Friends episode: flashbacks and the presence of Jack and Judy Geller. As the six relax after dinner thoughts turn to the Friends Thanksgivings of the past. There’s Joey getting a turkey stuck on his head, (he wanted to scare Chandler) and, brilliantly, Phoebe suffering as a wartime medic.

The main feature though sees Ross and Chandler returning to the Gellors home for consecutive Thanksgivings in the late 80s. First up, Monica overhears Chander call her fat, sparking her into a healthier lifestyle. He apologises profusely in the present. The next year, Monica accidentally drops a knife, severing Chandler’s toe and then mixes it up with a carrot, ruling out reattachment. He is mad about this revelation in the present and Monica tries to get back into his good backs by donning a turkey, complete with hat, sunglasses and a little dance.

The One With The Football (Season 3)

Friends was arguably at its peak in season 3 and this episode gets my vote for the best Friends Thanksgiving episode. With dinner cooking and the NFL on TV, the group decide to head to the park for their own game of football, which will be a first for Phoebe and Rachel.  Only Ross and Monica reveal they are not supposed to play football after their sibling rivalry went too far in childhood.

After the story of the ‘Geller Bowl’ they decide they will play. A 3-on-3 match ensues and just like in the pros there is flashing, shirt tearing and a good looking girl on the sidelines. The Dutch girl has Chandler and Joey competing for her attention during play, Rachel is frustrated by her lack of touches and Phoebe seems to be having the most fun. This one is all about Monica and Ross though, as they bicker brilliantly through the episode, right through to the closing scene. Give thanks for football.

What’s your favourite Friends Thanksgiving episode? Let us know in the comments or on our socials and check out more of our TV content.

Share
Facebook
Twitter
Pinterest
Linkedin
ReddIt
Email
Previous articleTed Lasso: A Season To Remember
Next articleProof Virtual Concerts are Here to Stay: Show4Me’s Success
Shaun Dearling
Shaun is FinalBoss' most prolific cinephile. If he hasn't seen it, it ain't worth watching. You'll find him writing about everything from blowout blockbusters to small-screen splendours as he waits impatiently for Lord of the Rings to be released by Amazon. Catch up with Shaun and see what he's been watching on www.letterboxd.com/shaun_1982.

The Kylo Ren Scar Change: 4 Reasons Why It Shouldn’t Have Happened

Aquaman – A Fishy Delight or Just Another Wet Squid?

Westworld New Series Talking Points: What Can We Expect From Season...