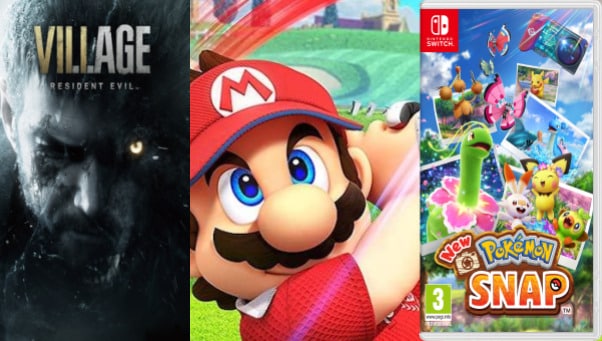 2021 promises to be an exciting year for gamers, as the first full year of the PlayStation5 and Xbox Series X. 2020 saw some huge releases, including The Last Of Us Part 2 and Ghost of Tsushima, so what will rival those titles in 2021? FinalBoss takes a look at what are likely to be some of the best 2021 games. We’ve tried to cater to all tastes, with selections for everyone from hardcore gamers to newbies and casual gamers.

In the game, you take on the role of either Leo Craig or Emma Cole who are being guided by a magical being named Balan. In the game, the player explores 12 worlds themed after the hearts of troubled individuals. Its gameplay follows the chosen protagonist as they explore sandbox levels, collecting items to progress to further areas and using a variety of powers unlocked using themed costumes.

Players use a hovercraft on rails to research Pokémon by photographing them. In the game, you take photos of different Pokémon within their natural habitats to build a “Photodex”, which can hold up to four photos of each Pokémon. Players can also retouch their photos using the Re-Snap feature after Professor Mirror grades the photograph on a scale of one to four stars. This version of Pokémon Snap features over 200 Pokémon for you to photograph.

The 10th instalment of the Resident Evil series and the narrative sequel to Resident Evil 7: Biohazard. Resident Evil Village follows Ethan who has been living with his wife Mia when Chris Redfield suddenly appears and kidnaps him to a mysterious European village. The game is set in an explorable village where players can buy weapons and items from a merchant, the Duke.

Psychonauts follows the conclusion of Psychonauts in the Rhombus of Ruin, with Raz having assisted Sasha Nein and Milla Vodello in rescuing head Psychonaut Truman Zanotto. In Psychonauts 2 players are in control of Raz, a newly graduated Psychonaut with powerful psychic abilities. In the game, players use telekinesis, pyrokinesis, and levitation to explore the mental worlds of several non-player characters.

The 7th instalment in the Mario Golf series following Mario Golf: World Tour in 2014. Super Rush is pretty straight forward as it follows traditional golf rules where the player’s primary objective is to hit the ball to the end goal. Each of the playable characters from the Mario franchise has its own abilities that give players an advantage. Interestingly Mario Golf: Super Rush has its own story mode where the player controls a Mii that can be personally customized allowing you to explore the Mushroom Kingdom.

This third-person 3D game features elements of survival such as harvesting water from cacti and chopping wood to make a fire. It also allows its players to use a variety of weapons and tools to survive and accomplish their objectives, for example, swords, guns, tents and cooking equipment. The combat and open-world exploration elements of the game allow you to play in both single-player and cooperative multiplayer modes. The game takes place across multiple locations with differing environmental conditions such as a desert, snow, forest, mountains, including, swampland, and deep-sea diving.

Humankind allows its players to lead their civilization across six major eras of human civilization. A distinguishing feature of Humankind is that within each of the eras, the player can select one of ten civilization types based on historical societies.

New World is set in the mid-1600s where players colonize a fictional land known as Aeternum Island. Start off the game by deciding on a “Region” and a “World” in order to create your own controllable character or avatar. The gameplay is unique in that no jumping exists, instead, the player may dodge or climb most environmental objects or use the life staff to cross large aerial spaces. Interestingly players are able to form groups of five members, join one of 3 factions such as “Marauders”, “Syndicate”, and “Covenant”, fight other players, or monsters, gain control over settlements and much more.

Set on Yara, a fictional Caribbean island ruled as a dictatorship by “El Presidente” Antón Castillo who is raising his son Diego to follow in his rule. The player takes the role of a local Yaran named Dani Roja, a guerrilla fighter fighting for freedom who attempts to restore the nation back to its former glory.

This article was written by guest contributor Zahra Arshad.

What do you think the best 2021 game will be? What are you most looking forward to?

Let us know in the comments, and check out more of our gaming content!

How eSports Are Providing an Online Community for Gamers

20 December 2018
We use cookies to ensure that we give you the best experience on our website. If you continue to use this site we will assume that you are happy with it.Ok