One of my favourite hobbies is going to the cinema and for the past eight months or so, that big screen itch has been left thoroughly unscratched. Thankfully though, cinemas are back open again now and the first film that I went to see was Cruella- the latest of Disney’s live-action, old material pilfering movies. Released at the same time in both cinemas and as premiere access on Disney’s streaming service, Disney+ – Cruella is one of the first films this year to place a tentative toe into the waters of a global cinema release. Originally set to be released in December last year, was the wait worth it? 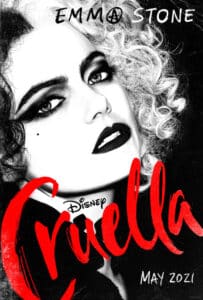 Cruella is a prequel of sorts to One Hundred and One Dalmatians, Disney’s animated classic based on the novel of the same name by Dodie Smith. It follows the early life of the story’s main villain, the fabulously evil Cruella de Vil, as she finds herself in hard times. She and her friends, Jasper and Horace, are London thieves until Cruella begins to follow her dreams of becoming a fashion designer. Cruella is directed by Craig Gillespie (director of I, Tonya) and stars some real Hollywood heavyweights, with Emma Stone as Cruella (or Estella as she is known often in the film), Emma Thompson as Baroness von Hellman (who makes Cruella look like Mother Teresa) and Mark Strong as John (Baroness von Hellman’s valet). 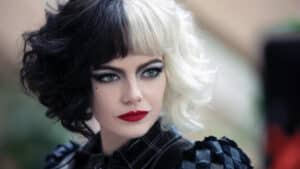 I absolutely loved this film. Cruella was kind of a mix between Ugly Betty and maybe Joker or Birds of Prey, with some heist and Deadpool style stuff going on too. Another comparison I have heard made is to The Devil Wears Prada, but I’ve not seen the film so I can’t comment on that. Cruella is one of those delicious films where the main character is a villain, and you find yourself rooting for them and their dastardly ways. They really flesh out Cruella with some poignant and believable motives, showing she has good qualities and an understandable drive to do what she does. 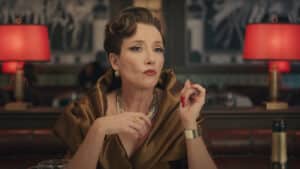 The stand-out part of Cruella is undoubtedly Emma Stone’s and Emma Thompson’s performances. Like two pampered cats hissing at each other over a bowl of caviar, Cruella and the Baroness have a real diva-off. The characters bounce nicely off each other, and Emma Stone really got into the gritty, vicious, almost split-personality nature of Cruella. She brings real sadness to the role as well, especially in the scenes when she has her cups of tea by the fountain in Regent’s Park. Emma Thompson really shows that she is one of Britain’s finest actresses. She must have had so much fun playing the devious and narcissistic Baroness, a fashion designer that takes all the credit for her employee’s designs. Cruella’s friends, Jasper and Horace (Joel Fry and Paul Walter Hauser respectively) were also great fun, making a fantastic comedy duo. 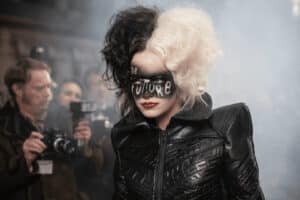 Cruella is hilarious from start to finish, as well as melancholy at times. There is a scene involving the Baroness and a champagne cork that I found particularly funny, probably to the annoyance of the other people in the cinema. The soundtrack was great, with lots of rock from the ’60s, ’70s and ’80s. The song that plays over the credits called “Call Me Cruella” by Florence and the Machine oozes wickedness. Lastly, the costumes and the dresses in Cruella looked faaaaaaaaabulous, ranging from some very swanky frocks to some gritty, punk-like alternative numbers that, combined with Emma Stone’s hair and makeup, looked badass. 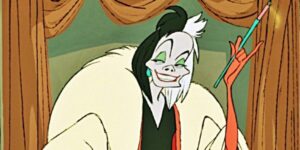 I’ll be honest, not a lot. I think the main bad side to the film for many may be the nostalgia that they hold for the original portrayal of Cruella in the Disney animated classic or past live-action remakes. It really is, unfortunately, in the same line as many of the other live-action remakes Disney has done, where they are trying to eek as much as possible out of nostalgia and old material. I find this incredibly sad because I almost don’t think it deserves to be put into that same category. If Disney hadn’t been so over the top with their remakes, perhaps many more people would give this film the chance it deserves. 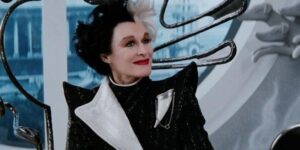 Another problem is the fact that this film is wholly unnecessary. Nobody was asking “How did Cruella become Cruella?”, in the same way that nobody was asking “Is Maleficent that evil?” and “How did Willy Wonka become Willy Wonka?”. But, I suppose, no film is strictly “necessary” to make. If the idea is fun, the writing good and the films well-executed, isn’t it a nice little unexpected treat?

The only practical thing wrong with Cruella is the runtime, which is 2 hours and 14 minutes long. It never felt like it dragged but for younger people and those in uncomfortable seats, this is a tad too long. There was definitely 15 or 20 minutes in that film that could have been cut or at least streamlined.

If you take the question at face value, no it isn’t. But only because “live-action Disney film” covers all Disney’s live-action films, not just the modern remakes and “inspired by” films that are Disney’s flavour of the month. I’m sorry but there is no way Cruella is better than Marry Poppins, The Princess Diaries or most of the Pirates of the Caribbean films, to name a few. I can’t even say for certain if Cruella is the best live-action remake, as I’ve not seen all of them. Going off the list on Wikipedia, I haven’t seen Rudyard Kipling’s The Jungle Book (1994), Cinderella (2105), Christopher Robin (2018), Aladdin (2019) and Lady and the Tramp (2019). However, excluding these, I can undoubtedly say that Cruella is by far the best of the Disney live-action films, and I would be confident that it would still be the best if I watched the ones I haven’t seen. 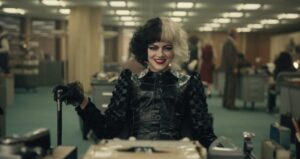 For those of you reluctant to see Cruella out of a sense of nostalgia or perhaps because you think it’s a dumb, unnecessary film, I urge you to see it. It has some incredible acting, an engaging story and is aesthetically sublime. I honestly think it’s time to start taking films for what they are. Sure, Disney is preying on people’s nostalgia and a sense of obligation to see films with characters they like, without really coming up with too many original ideas. But along the way, there just might be a few gems like Cruella that come along. It’s a fun film and totally worth watching.

14 October 2019
We use cookies to ensure that we give you the best experience on our website. If you continue to use this site we will assume that you are happy with it.Ok