Today (8th March) is International Women’s Day. With roots stemming back to 1909, it is a day to highlight inequality, push women’s rights and to celebrate the women in our society. So, to celebrate International Women’s Day, I thought it would be fun to make a list showcasing some fantastic female superheroes that should get the spotlight. Female leads in superhero films is an area that has been severely underdeveloped. At the time of writing, the Marvel Cinematic Universe still only has one film out of 23 with a female lead (although, Black Widow has been almost released for a while now).

Now, credit where credit is due, there does seem to be a long-overdue push for diversity in the superhero genre recently. Cornerstones of the genre such as Black Panther, Captain Marvel and Wonder Woman have been widely acclaimed and well received. Upcoming MCU projects such as Black Widow, Shang-Chi and the Legend of the Ten Rings, Ms. Marvel and Thor: Love and Thunder will also help boost diversity in film, so I think things are going to improve in the genre’s future. But they could do more. With such a wealth of diverse characters, particularly with regards to female superheroes, there is plenty of material for filmmakers to choose from. There are many DC and Marvel female superheroes in the respective back catalogues, so here are my top 5 female superheroes that need their own movie. 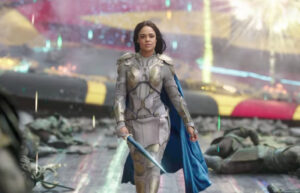 Valkyrie is easily one of my favourite female superheroes in the MCU. Played by Tessa Thompson, she is fantastic in Thor: Ragnarok, probably the best new character in that film (sorry Korg). We didn’t get much of her in Endgame (though we do get to see her flying a Pegasus she found from somewhere) but hopefully, she will have plenty of screen time in the upcoming Thor: Love and Thunder, which will also have Jane Foster (played by Natalie Portman) playing a key role. But why do I think she needs a solo film? Well, cast your mind back to when she shed a little light into her backstory in Ragnarok. There is that fantastic, almost renaissance artwork scene, where the Valkyries battle Hela. Who wouldn’t want to see that as a film or tv-series? 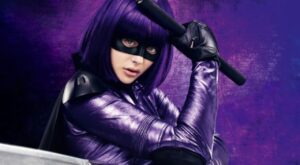 You’re probably asking “Who is Hit-Girl?”. Well, back in 2010, there was a fantastic superhero film called Kick-Ass. Based on the comic series of the same name, it was a film in which Dave Lizewski (played by Aaron Johnson) is a teenager who decides one day to try and be a superhero called Kick-Ass. He gets in way over his head but is saved by an unlikely source. Hit-Girl, an 11-year-old girl, starts whirling around, slaughtering bad guys and dropping the C-bomb. Played by Chloë Grace Moretz, we see her, in Kick-Ass and Kick-Ass 2, grow up and go through school. Eventually, at the end of Kick-Ass 2, she drives away on her motorcycle, leaving her new life behind. I think it would be cool, now that the actress has grown up, to see where she goes and what she does. Thankfully, she has her own comic book series to draw from, including a storyline where she goes and delivers vigilante justice in Columbia. 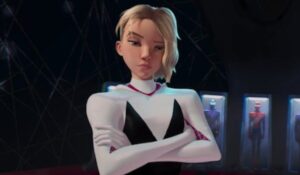 In 2018, Spider-Man: Into the Spider-Verse soared to the top of many people’s favourite superhero film lists. In the film, there was a scrumptious selection of different “Spider-Man” variants. One of those was Spider-Gwen, who in her reality is bitten by the radioactive spider instead of Peter Parker. Voiced by the brilliant Hailee Steinfeld, I think there is room for a solo film with her in an animated “Spider-Verse” movie series. I mean, we have seven films (with another one upcoming) dedicated to the Peter Parker Spider-Man story arc, why not a Spider-Gwen film? They already have an A-list actress in the role and the springboard of the first film’s success. It makes sense to me that this female superhero should get her own movie.

Buy Spider-man Into The Spider-Verse – Amazon US | Amazon UK 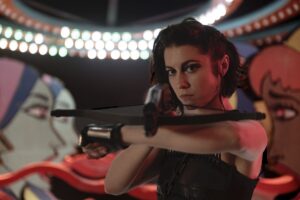 Now, I wasn’t overawed by DC’s Birds of Prey (and the Fantabulous blah-blah-long name-blah). I enjoyed it but it really had very little that could elevate it above an average film for me. One thing that did make the film better was Mary Elizabeth Winstead’s performance as the Crossbow Killer…er, I mean Huntress. Harley Quinn says it best. After Huntress kills a bad guy whilst riding him down a slide, Harley Quinn says “You are so cool!”. And she is, she is one of those badass characters that just screams competence when you see them laying into supervillain henchmen. Not only was she an awesome fighter, she was also really funny and had an awkward, endearing personality that could absolutely carry her own “Deadpool” style action comedy film, I think. 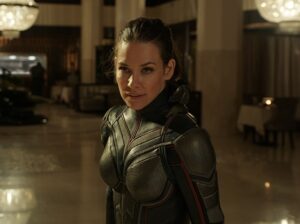 Right at the top of our list is, for me, probably the “readiest” female superhero for her own solo film. Black Widow and Wanda Maximoff were probably above Wasp in that particular scale, but they now have their own solo projects out or upcoming. I literally feel like you could just lift Wasp out of the chronically underrated Ant-Man series and put her into her own film and it would just work. Hope van Dyne (played by Evangeline Lilly) is a fantastic hero, who is great in combat and has a real air of command about her. She is confident in her abilities and it would not surprise me to see her take a much more active role in the upcoming Avengers films. Evangeline Lilly was given the short straw with Tauriel, the Hobbit’s most controversial character. However, I think she has been given something she could get her teeth into with Hope van Dyne. I’d love to see what she could do with the whole film based around Wasp. The character has the brains and the brawn to really lead the MCU forward.

I’m sure there are many female superheroes that you are screaming at your screen right now that I have missed from this list. Where is She-Hulk or Batgirl, for example? I’ve tried largely to keep anybody who already has their own solo TV series or has something upcoming already in the pipeline off the list where possible, so that may be why some of your favourites are not on the list. Who is your favourite superheroine? Who, be it in film, TV or comic, do you think doesn’t have enough screen time? Either way, I think the future is getting brighter for diversity in the superhero genre, which I am incredibly excited for. Happy International Women’s Day everyone!

Find more superhero content in our TV and movie sections!

Brave New World: How Virtual Reality Is Changing Our Lives

The Walking Dead: The Best of 10 Seasons

5 October 2017
We use cookies to ensure that we give you the best experience on our website. If you continue to use this site we will assume that you are happy with it.Ok