A Quiet Place is a horror film with a truly gripping narrative. This film will have you on the edge of your seat and rooting for the characters from the very beginning.

Set in a post-apocalyptic world overrun by monsters who hunt using incredible hearing, the film follows a family whose desperate parents Evelyn and Lee (played by Emily Blunt and John Krasinski) are trying to protect their young children. When every sound can lead to violent death, Lee struggles to find a way to fight back whilst pregnant Evelyn tries to figure out how to protect their children.

A Quiet Place begins in a typical post-apocalyptic scenario, but we quickly learn that this is like no other world we have seen before. The characters have to communicate through sign language and the silence is excruciating to watch as the audience. 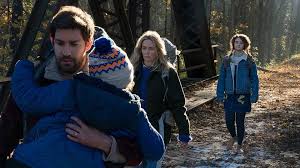 The family must go out to find food and during one trip to an abandoned store, Lee takes a toy from youngest son Beau in fear of it activating and making sound. Older sister Regan gives it back to her brother in a sneaky act of kindness. However, when the family are silently walking home the toy activates causing a loud noise. It isn’t long before we have the first glimpse of the genuinely terrifying creatures who snatch the young boy and kill him.

At this point, we know we aren’t messing around, this film means business.

The plot continues to take on your typical horror conventions and provides tense moments as the family try and navigate the new challenges they face. Krasinski, who both acts and directs, cleverly adds tension by showing us visuals of potentially loud scenarios, whilst leaving us in complete agonising silence.

However, what puts A Quiet Place on a pedestal above your usual horror is the exploration of the family dynamic. The relationship between Regan and Lee, which is tested following the death of youngest child Beau, is a fantastic and relatable presentation of dealing with guilt and adolescence. The story isn’t centred around jump scares or disgusting creatures, but instead centred around love, family bonds and sacrifice.

The films climax is terrifying and incredibly intense. It is made all the more realistic by the phenomenal performances from the entire cast who, despite lack of dialogue, manage to portray incredible emotion. Like her character Regan, actress Millicent Simmonds is deaf in real life, this was a fantastic choice by Krasinski to make the performances and interaction between the characters incredibly authentic. Krasinski also made an interesting choice when casting his wife Emily Blunt to play his wife in the movie. The choice paid off though with the dynamic between the characters being very realistic. Blunt also has incredible range and is phenomenal in a scene where her character is going into labour.

Overall, A Quiet Place will leave you feeling like you’ve been punched in the stomach. It is truly an original horror film which explores what it means to be human, whilst providing the anticipation and scares that you crave from the genre. You will watch in terror, but you won’t dare to scream.

Want to pick up A Quiet Place? Click here

18 May 2022
We use cookies to ensure that we give you the best experience on our website. If you continue to use this site we will assume that you are happy with it.Ok