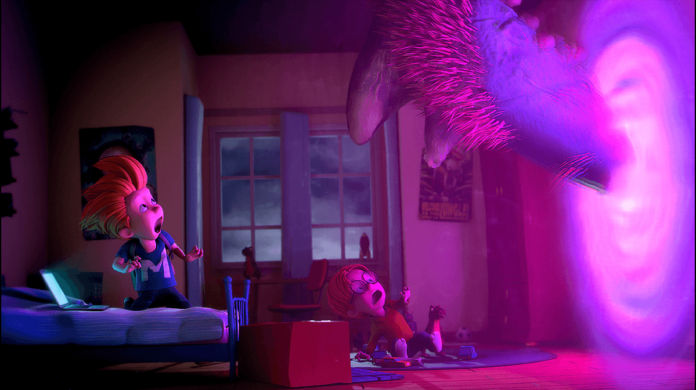 Released in 2013, Max: The Curse of the Brotherhood has been picking up rave reviews since it landed on the Xbox One all those years ago. So popular was it, in fact, that it was eventually developed for the PC and PS4. Now, this bright little puzzle-platform game has made its way to the Switch. But how does it stack up all these years later?

What is Max: The Curse of the Brotherhood About?

Max: The Curse of Brotherhood follows protagonist Max – surprise. After coming home from school to find his little brother Felix smashing his toys, Max decides to search on ‘Giggle’, for a spell to wish his innocent little brother away.

Can I just stop here and say that my immediate first impression of Max is that he seems a bit of an ass, his little brothers so small and cute and come on he’s only like 5 years old.

As you can find anything on ‘Giggle‘ these days, Max is able to cast a spell to rid himself of his brother. Felix then gets sucked away into a terrifying portal, Max, wrapped with guilt, instantly regrets his actions and sets off to go after him. Arriving in another dimension, Max sees his poor little brother Felix being carried away by a giant blue monster, and so the journey to get him back begins.

What Is There to Like About Max: The Curse of the Brotherhood?

Let’s just start by saying, this game looks like it was made by Pixar. It’s got such a happy, bouncy animation feel to it. The 2.5D graphics are showcased great here for a title on the less powerful Nintendo Switch, with its style really making it feel like being in a Disney movie. Max: The Curse of the Brotherhood has that sort of strange world design of being a bit too big for our hero, as you see in so many Disney films. We liked how it was designed to look scary but not too scary – daunting, but intriguing.

After engaging in some of the game’s basic platformer mechanics, which primarily includes traversing a 2.5D environment through dodging obstacles, climbing ropes, ladders and vines, and timing jumps just right, you’ll eventually come to a treehouse, where things start to ramp up both in terms of gameplay and plot.

Before we get into that, we have to say that while playing this game you’ll notice the learning curve is very gentle. You start with some simple puzzles, jumps and challenges, and eventually move onto tougher obstacles. This is great for two reasons:

As we continue to follow Max, we learn that Lord Mustacho (this dastardly wizard who thinks he owns the place) has captured Felix. This is all learned via the words of some sort of tree-based witch, who then casts a spell on the one item Max had in his bag.

This introduces another core mechanic to the game: The fabled highlighter. This bit of gear can be used as a way of navigating puzzles, including the ability to grow platforms from the ground and smashing them down again. The highlighter is an addition that really adds some depth to the puzzles involved in the game, and an extra layer to what may otherwise have been a bog-standard platformer. The tool often makes you think about how you’re going to achieve certain goals; such as setting platforms at just the right height to get where you need to go and destroying them again to reach different areas of the game.

In search of your brother, you must travel through different environments such as deserts, jungles and rainforests to name a few! In each area your badass highlighter weapon will acquire a new superpower, furthering the creativity behind the puzzles and adding new problem-solving elements to keep the gamer on their toes. In the jungle, for example, you are able to create vines on trees for you to swing from, while other areas grant you elemental powers like blasting fireballs to destroy obstacles and barriers.

We liked that Max: The Curse of the Brotherhood presents you with puzzles where you really have to use your brain. You often have to work out how to get to the other side of something like a horrible pit (which usually has some twisty fiery vines, hulking enemies or something else nasty) without any help or guidance. It’s all about using what you’ve learned through that natural progression. 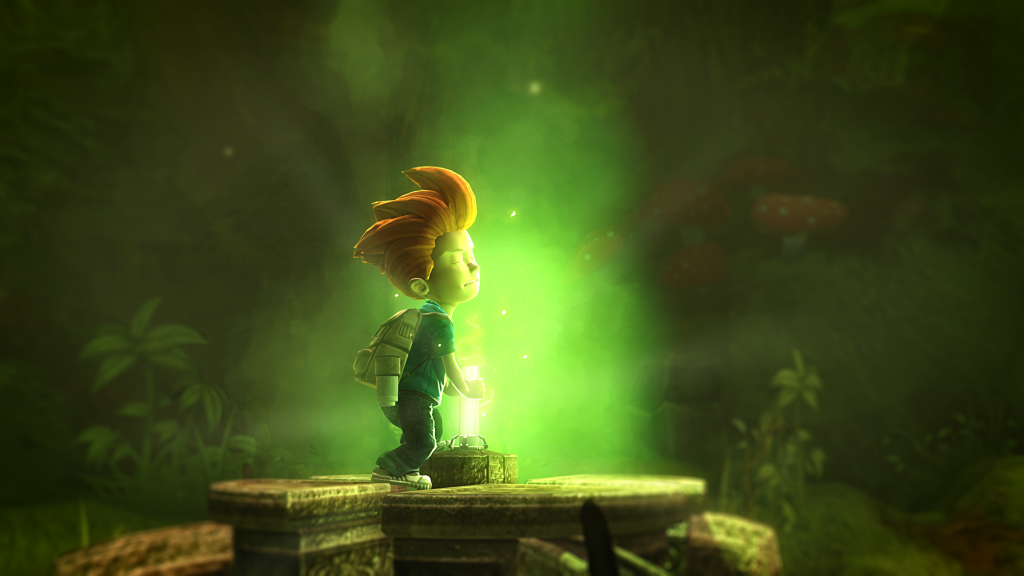 What’s Not to Like About Max: The Curse of the Brotherhood

Unfortunately, there aren’t any multiplayer options. While Max: The Curse of the Brotherhood does play like a lone ranger game, some local co-op functionality would have definitely added to the title’s appeal. As a Nintendo Switch game geared for both adults and kids, being able to jump in as a family experience would have been a welcome
addition. We can see why it didn’t fit the more serious gaming nature of the Xbox One or PS4, but given the nature of the Switch, it seems like an oversight.

The lack of co-op isn’t our only gripe, although they are few and far in-between. The storyline was quite simple. Obviously, there is an aim at children, and we aren’t expecting a detailed Game of Thrones style narrative, but a few more nuances in the storytelling would help engage older audiences.

Let’s also not forget that on other consoles, you need to be observant. You’ll be running into a few of Lord Mustacho’s eyes dotted around the strange world (aiding in his omnipresent delusions of grandeur). Destroying them and collecting the eyes will provide you with achievements and trophies, on the Xbox and PS4. But on Nintendo? You’ll receive….NOTHING! We probably missed about 50 on our quest… there was no real incentive to pay attention to these hidden items. Not a major problem but something to note.

While the game mechanics available were great, and the puzzles were challenging, Max: The Curse of the Brotherhood could have done with a wider variety of obstacles other than trying to cross barriers or run from monsters. If DLC were added at a later date, however, this would address our concerns here, it wouldn’t need to be an entirely new narrative per se, but even just a challenge mode with ramps up the difficulty could have provided that added curve of difficulty for players who find the main story too easy.

Our Final Thoughts on Max: The Curse of the Brotherhood

The game itself was so pretty. We loved that it wasn’t just the same scenery throughout the whole game and you had to go through different environments. The world developed around the story and the art style was exceptionally well done. It really stands out well on the Nintendo Switch‘s graphics engine. Speaking of which, the game runs very smoothly on the platform. We didn’t experience any glitches, slowdowns or frame-rate issues playing this game.

In terms of gameplay and mechanics, it really was easy to pick up (once again – this is coming from an extremely casual gamer). Anyone, aged 8 – 80, is going to be able to jump right in with this one. It’s the perfect title for all those in the gaming spectrum, from adult gamers looking for quirky art style and simple gaming jaunt, to kids sat in the back of the car playing away the hours – this title has a subtle added benefit for kids in particular, as the practical method of problem-solving really works to enhance logical thinking.

We also can’t avoid that it’s got a really sweet message about sibling love and family loyalty. You know what Max? You went through a lot to get your little bro back, Final Boss forgives you for being so selfish at the beginning of the game! Of course, in the end, Max has a showdown with Lord Mustacho and eventually saves Felix, they’re then transported back to planet earth and the last scene is of them playing together in Max’s room in perfect harmony.

Seeing as Max is more of a casual title we offered it up to our resident casual gamer James, but apparently, he was busy washing his hair. So, FinalBoss handed over both our Nintendo Switch and copy of Max: The Curse of Brotherhood to our close friend, fellow casual gamer Valentina, for a fair and comprehensive review.

Val is an everyman gamer. She’s played a few games in the past such as ‘Simon the Sorcerer’, Pokemon on the Gameboy and, of course, the wonderful Harry Potter games. She was asked to play this game because she’s said in the past that she’s a massive fan of Viva Piniata and with the style and prettiness of this game, we’re sure she’d enjoy Max too! Before now she’s never used a Nintendo Switch, but she was really surprised at how easy it was to pick up!

How to Play Marvel Snap – Everything you need to know

Original Witcher Game Is Being Remade from the Ground Up!

Assassin’s Creed: Origins — What’s it Like? First Impressions and Gameplay...

Best Games of 2018: 10 Most Anticipated Games of the Year

25 January 2018
We use cookies to ensure that we give you the best experience on our website. If you continue to use this site we will assume that you are happy with it.Ok